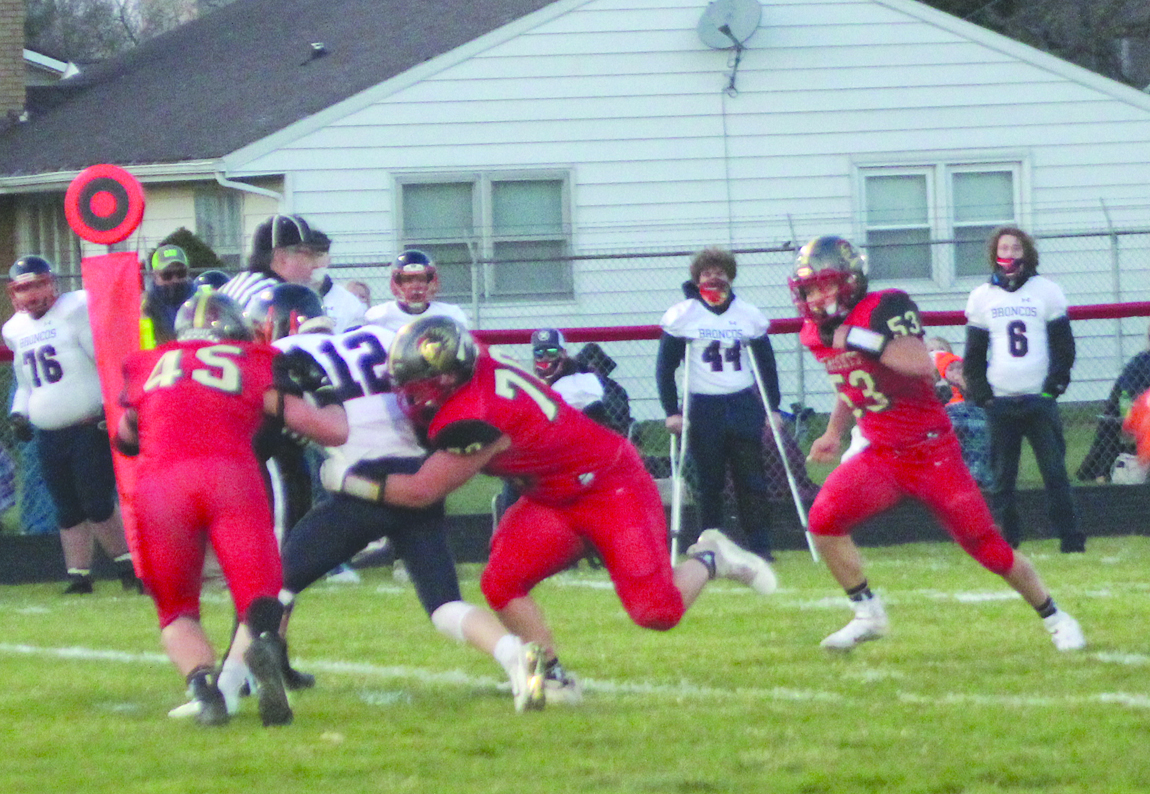 Knight defenders, Austin Abercrombie 45 and Brayden Fay 70 tackle CGB’s QB Colin Warren while Rene Juarez Cuevas comes in to help with the tackle. The Knights would up their season record to 2-1 with a 37-6 victory over the Broncos.

The Arthur Lovington Atwood Hammond Knights football team took on the Cerro Gordo Bement Broncos at home in the third game of the 2021 season. Both teams came into the contest with one loss and one win in the six game spring season.

CGB won the toss and elected to receive. They began their first drive at their own 22 yard line and methodically moved the ball down the field mostly on running plays by running back Cody Layfield. A couple of penalties and incomplete passes caused the drive to stall and the visitors turned the ball over on downs with 6:26 left in the first quarter.

On the Knights’ first possession, they picked up a couple of first downs but a fumble that was recovered by the Broncos Colin Warren gave the ball back to CGB at the 4:12 mark. Layfield carried for 16 yards on five carries but the Knights Brayden Fay recovered a Bronco fumble with 5.8 seconds remaining in the first quarter.

ALAH’s next drive got off to a rocky start with a couple of penalties that backed them up to their own 8. But a pass completion that bounced off a couple of players ended up in Fay’s hands and a face mask penalty by CGB on the next play kept the drive alive. Kaden Feagin would put the Knights on the scoreboard first with a 41 yard touchdown run. Aaron Likens kicked the extra point and the home team led 7-0 at the 9:50 mark of the second quarter.

The visitors were able to pick up a couple of first downs using pass plays of 18 yards from QB Colin Warren to Jacob Rogers and a 7 yarder to Garrett Daniels. The Knights jumped offsides on a fourth down play to give the Broncos another first down. But another turnover, a fumble recovered by ALAH’s Finn Davison, stopped the drive at the Knights’ 35 with 7:52 left in the first half.

ALAH put together a series that started at the 35 and ended with a td. Runs of 8 yards by Davison, 3, 9 and 21 by Billy Fifer, and a 20 yard run and then the final 8 yards by Feagin put the ball in the end zone for the home team and with Likens’ kick the lead was 14-0 in favor of the Knights.

The teams traded possessions with CGB punting to end theirs and the Knights’ kicker Likens missing a 41 yard field goal attempt.

CGB’s next possessions resulted in another turnover, this time a pass interception by ALAH’s Austin Plank. The Knights took over with 49.8 seconds left in the half. Two big runs, a 15 yarder by Feagin and a 24 yarder by Davison moved the ball to midfield. On the next play,

Feagin took the ball 50 yards into the end zone as the clock ran out on the first half. The Likens’ EP kick was good and the home team led 21-0.

Cerro Gordo Bement may have been down at the half but they came out strong in the third quarter. First on defense, they held the Knights to a three and out and then mounted a strong drove when they were on offense that moved the ball from their own 43 all the way into the end zone. Most of the yards were picked up by Cody Layfield who ran tough throughout the game. The touchdown was on a third down pass play from Warren to Connor Brown. The extra point run by Warren was stopped and with 3:32 left in the third the score was 21-6.

A pass interference call on the Knights moved the kick off for the Broncos to the Knights’ 45 yard line and CGB elected to try an onside kick to try to keep their momentum going. Unfortunately the kick didn’t go the requisite 10 yards and the home team took over at the Bronco 37. Finn Davison picked up gains of 13, 12 and 5 yards and Billy Fifer, runs of 2, 20 and 9 and then capped the series off with a 7 yard td run. The EP kick failed and ALAH led 27-6 with 10:49 left in the game.

The Broncos couldn’t get anything going on their next series and were forced to punt. A bad snap and a tackle of the punter by Davison gave the ball back to the Knights at the Bronco’s 27. The CGB defense held and didn’t allow a first down but the ALAH kicker, Aaron Likens who tied the school field goal record in the Cumberland game, came in to attempt a new school record 35 yard field goal. It was good and the lead was 30-6 in favor of the home team with 6:37 remaining in the game. The previous record was 33 yards and was held by Jack Oye from 2002 and Cliff Wiley from 2004.

Once again, Bronco junior, Cody Layfield tried his best to get the offense going gaining 14 yards on several runs but an incomplete pass on a fourth down try gave the ball back to the Knights with 3:10 left on the clock. Kaden Feagin would score his fourth touchdown on the night on the first play for ALAH. This time it was a 50 yard run. Likens’ kick was good and the score was 37-6 in favor of the Knights.

CGB had the ball one last time and kept working hard to move the ball. Layfield had 17 yards on this drive to give him unofficially, 121 yards in the game, every one of them hard fought and well earned. A long pass to the end zone was picked off by the Knights’ Jamison Rocke with 12.1 seconds left and they took a knee to end the game.

Arthur Lovington Atwood Hammond, 2-1 on the season, travels to Arcola to take on the Riders next Friday, April 9. Cerro Gordo Bement, 1-2 on the season, returns home to host the Argenta Oreana Bombers that same evening.