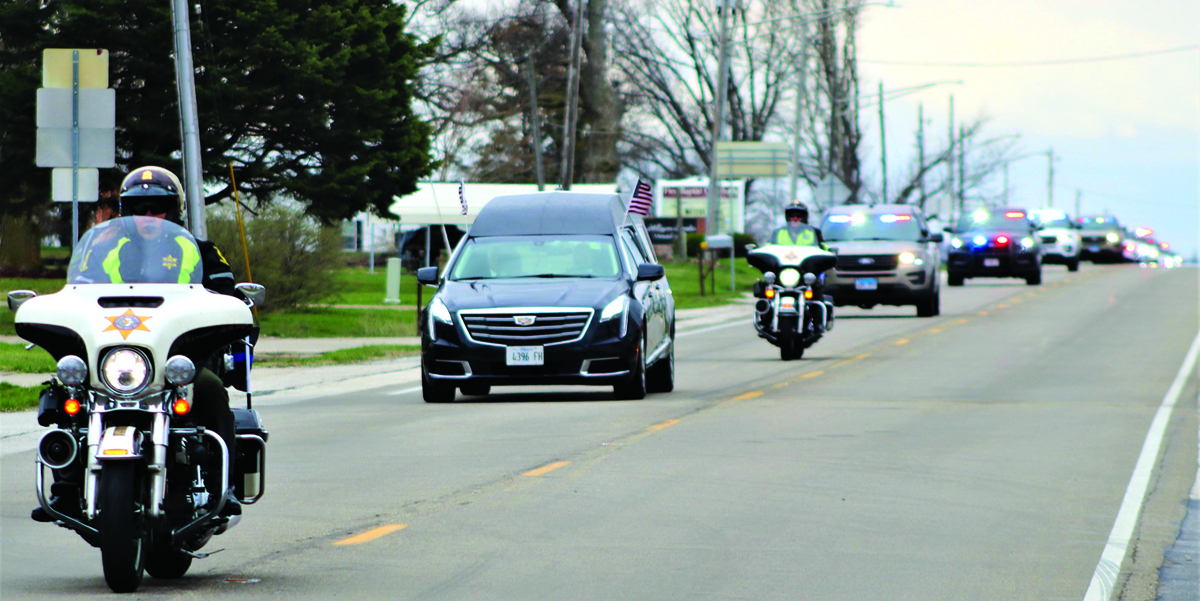 Emergency lights were flashing as far as the eye could see as the procession for Illinois State Trooper Todd Hanneken traveled down Rt. 36 on Friday afternoon. Fire trucks with large flags, local police officers and those just wanting to pay their respects were seen along the way. Thank You Trooper Hanneken for your dedication and service to Illinois.

Illinois State Trooper Todd Hanneken, 45, was escorted home on Friday, the last journey on Rt. 57, Rt. 36 & Rt. 121 that he will travel again. Trooper Hanneken was killed on Thursday morning, March 25, when he was westbound on Rt. 10 and his squad car left the road. He was air-lifted to Carle Foundation Hospital with life-threatening injuries. He was pronounced dead at 11:45 a.m., according to ISP Director Brendan Kelly.

The procession began at the coroner’s office in Champaign, went Rt. 57 to Rt. 36 to Rt. 121 passing underpasses and small towns along the way with fire departments, police officers and people wanting to pay their respects to a State Trooper that was loved by family, friends and colleagues.

On Saturday, ISP released this statement from his family:

“Todd Hanneken fulfilled his lifelong dream of becoming an Illinois State Trooper. He never wanted to do anything else in life as his career but be a road trooper. However, this was just his career. It did not define him or fully represent him. His family and friends did. He served and protected for them, and for all of us. He did this in what he would describe as just doing his job. He helped people, often times going above and beyond with no one noticing but that’s what he did.

He didn’t want the attention and limelight for doing his job. In 2018, he helped save a man from a burning car by jumping on top of the hood and kicking out a windshield. He was quick to point out that it was not “him” but “we” that did that. He could have easily died for someone else he didn’t even know that day and probably a few other days too. But he didn’t. Instead, we were given more time, but unknowingly more time is what we now don’t have. Todd was taken from us suddenly.

He had plans other than the State Police. There were a million things he was doing, from his vehicle and recreational hobby to updating our house to planning on watching the boys during the high school baseball season to the next time he could get together with family and friends. His community of Mt. Zion and the area meant so much to him. He gave great attention to others and what they needed. He had an infectious laugh and was always the loudest at the party. He was a big kid himself and hardly ever serious! He always made sure our boys and those around him knew he cared for them. He was a tough guy on the outside but a loving, compassionate person inside.

Thank you everyone that cared about Todd and for Todd. There’s not enough words that we can say about those of you he loved. We want the world to know he was a great husband, father, son, brother, and friend. His legacy will be entrusted in all of us to carry forward. It is this:

Live your life to honor your loved ones. Hold them tight. Prioritize what matters.

We don’t know how we are going to move forward, but we know that we are. This is what Todd would want.”