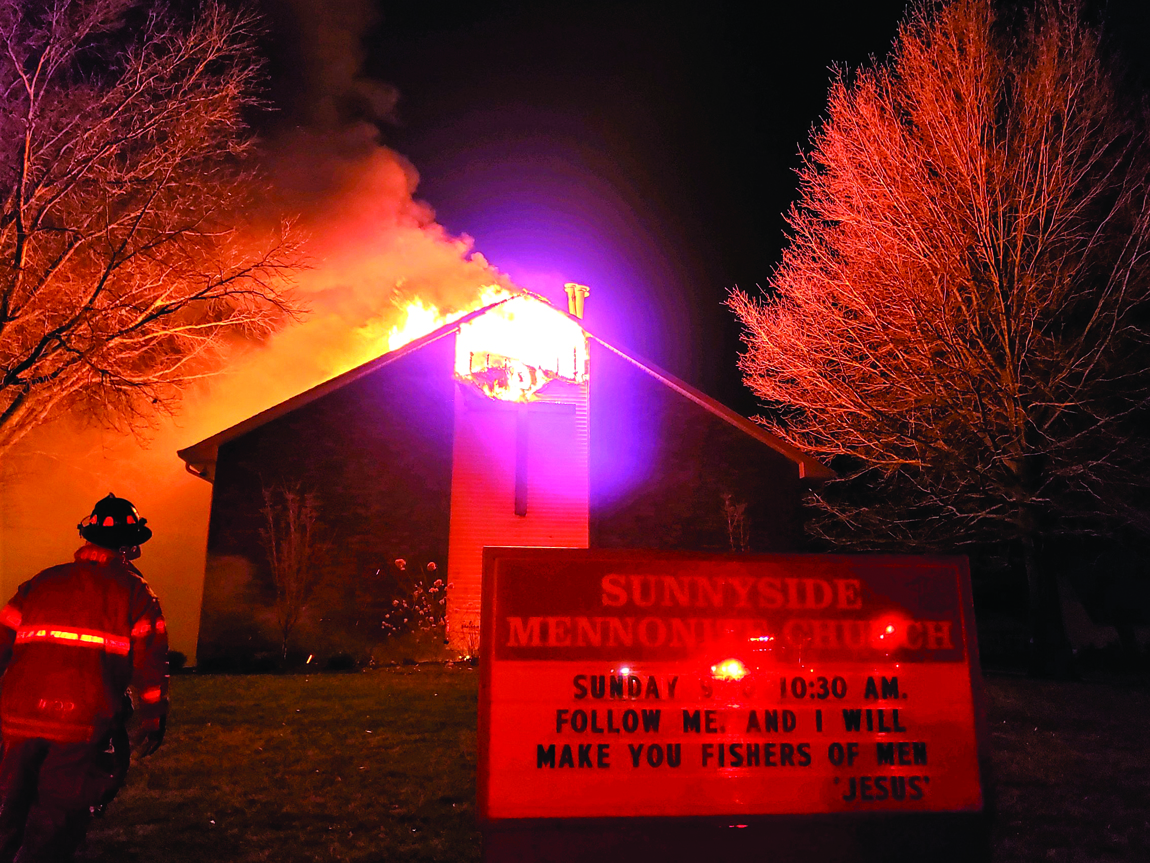 The Sunnyside Mennonite Church was reduced to a pile of ashes on Friday, March 26, after an early morning fire. The cross was fiberglass and was saved, even though part of it was damaged.

The Sunnyside Mennonite Church was reduced to a pile of ashes on Friday, March 26, after an early morning fire.

Arthur Fire Chief Chris Helton stated “Douglas County received the 911 call around 2 a.m. from a passerby telling them the church was on fire. We were dispatched and arrived at the church at approximately 2:15. At that time flames were coming from the gable at the north end above the cross. Flames were also coming out of the east side of the roof. We entered the back of the church thinking we could save most of the building. At that time there was no smoke in the foyer. By the time we could get our hoses strung out, which takes only minutes, the trusses collapsed, and the roof fell in.”

At this point the trustees of the church determined there wasn’t anything to save. Chief Helton said “when this happens it becomes a defensive fire. This means we do what we can to keep it under control and let it burn.”

An excavator was called in and arrived sometime after 4 a.m. He pushed the walls into the basement area so the fire would be contained and let it burn. This makes for less debris to dispose of.

Helton said the winds were out of the north and pushed the fire through the building. They were definitely not in our favor. Helton speculated the cause of the fire may have been electrical or possibly a lightning strike.

The bell tower burned, but the firemen were able to save the bell. The cross was fiberglass and was saved, even though part of it was damaged.

According to information received, the original building was built in 1959-1960. There are approximately 94 members.

Larry Rocke, Pastor of the Sunnyside Church, stated, “We got the call about the fire at 2:19 a.m. When we were about a mile away from the church house, there was a really bright flash. We thought something had exploded but found out later that was when the roof burned through and blew out. When we arrived on site, I thought the building would be saved. There were flames coming out of the north end of the roof, but I felt like it would be contained. The wind was not in our favor though and the fire was too far along for the firemen to go inside and it was too dangerous for them to go inside.”

The devastating fire has not deterred their faith. On Sunday Pastor Rocke stated, “The congregation had a time of sharing, healing and praying for each other. I shared from Isaiah 61 that ‘God heals the brokenhearted and brings beauty out of ashes and the oil of joy for mourning.”

The congregation has found a temporary home at the Arthur Christian School on Rt. 133, west of Arthur and will there for a while. Pastor Rocke says it will take some time to rebuild. “We want to follow the leading of the Lord in this process. We know God has a plan for Sunnyside.

Rocke added, “We are blessed to live in a community that cares and pulls together. Thank you to the Arthur Fire Department as well as all the other ones involved. Thanks for all the calls, texts, e-mails, and acts of kindness. We praise God for His goodness to us. We will rise again!”