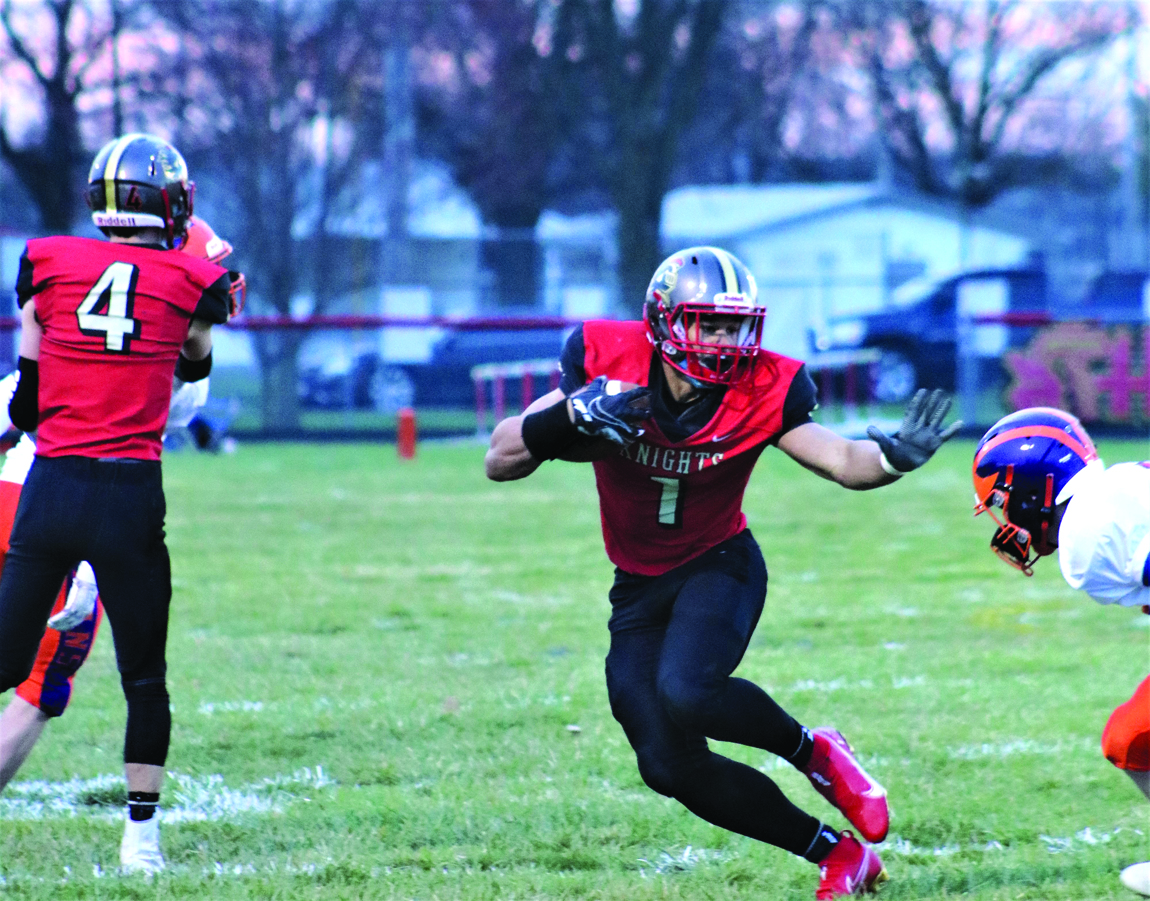 ALAH’s Kaden Feagin #1, eludes a would be tackler from Tri-County as Jamison Rocke makes a block on another Titan player. Feagin had 5 carries for 118 yards in the game, scored three rushing touchdowns and returned a punt 78 yards for another TD.

The Arthur Lovington Atwood Hammond Knights football team earned a big victory on a big night. Not only was it the first home game of the season but it was also Senior Night and Homecoming.

The evening started with the introduction of the 13 Senior football players and their parents along with the 14 Senior Marching Band members and their parents. It continued with a dominant performance by the football team that ended with a 41-7 win over the Tri-County Titans. The night also included a halftime golf cart parade of the Homecoming attendants and the premier of the ALAH Marching Knights halftime show, The Grand Expedition.

The big and busy night was capped off with the coronation of the 2021 Homecoming King and Queen after the game.

The game started with ALAH kicking off and the defense shutting down the Titans’ offense who opted to fake a punt on fourth down but were stopped and the Knights offense took over.

Just two plays later, running back Kaden Feagin took the ball 36 yards into the end zone for the first of his four touchdowns in the game. Aaron Likens kicked the extra point and with 9:44 left in the first quarter the home team led 7-0.

Tri-County went on a long drive that would take the clock down to 1:09, picking up four first downs along the way but the offense stalled at the Knights’ 7 yard line and the visitors came away empty.

The Knights and Titans then traded fumbles on the next respective possessions. Feagin recovered the Titan fumble but the Knights were stopped and forced to punt. Tri-County turned the ball over on downs again at the 8:49 mark of the second. Again just three plays later Feagin outran the defense and scored on a 50 yard run. Likens’ kick was good and the ALAH led 14-0 with 7:06 remaining in the half.

Once again the Knight defense stopped the Titans and Feagin would pick up another td before the half ended. After he returned the Titan punt 23 yards, teammate Billy Fifer broke through the line and picked up a huge gain of 34 yards. This set up a 9 yard touchdown run by Feagin and with Likens’ kick the lead was 21-0.

The visitor’s last possession ended when the clock ran out on the first half with the score still standing at 21-0 in favor of the Knights.

ALAH received the second half kick-off and maintained their momentum from before halftime. Just five plays in, Finn Davison got the ball on a double hand-off and scored from 36 yards out with just two minutes off the clock. Likens’ kick was good and the lead was 28-0.

Tri-County’s next possession would last almost 5 minutes but the Knights’ defense finally forced them to punt. Kaden Feagin was back to return the punt and he did just that, going 78 yards to the end zone. After Likens’ kick the score was 35-0 in favor of the home team.

After another Titan punt at the 3:09 mark of the third, the Knights put together a drive that had Davison gaining 33 yards on two carries, Fifer picking up 9 and QB Brady Borntreger connecting with Jamison Rocke on a 19 yard pass. Fifer would take the ball the final 5 yards for a touchdown. The EP kick was not good but the 41-0 lead would mean a running clock for the final thirty eight seconds of the third quarter and for the rest of the game.

The Titans did manage a score in the final quarter after a long drive. QB Jack Armstrong scored from 5 yards out and the extra point kick by Alex Acerra was good. The Knights’ reserves and JV players ran out the clock and the Knights gained a big 41-7 victory on Senior/Homecoming Night.

ALAH returns to Wilson Field next week for their third game of the season against the Cerro Gordo Bement Broncos. Game time is 7:00 p.m.