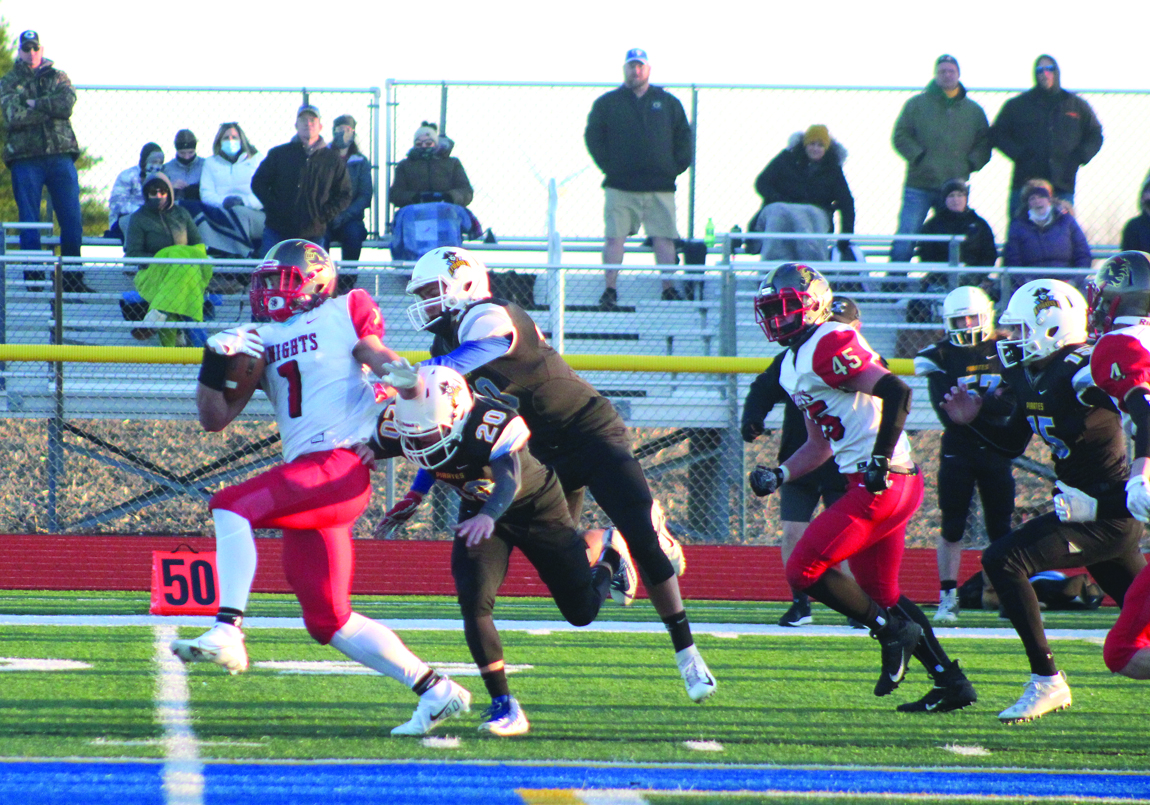 Arthur Lovington Atwood Hammond Knight running back Kaden Feagin breaks away from the Cumberland defense on his way to the first touchdown of the 2021 season. Feagin’s td run was 69 yards and was the first of two touchdowns he had during the game. His second run was 48 yards long and trimmed the Pirate lead to 14-10 in the second quarter of the game last Friday night.

As if playing football in March wasn’t strange enough, the Arthur Lovington Atwood Hammond football team opened their season at Maroa-Forsyth’s field. The Knights’ opponent, the Cumberland Pirates were supposed to host the game but after all the rain this past week, their field was unplayable. ALAH Athletic Director, Nathan Seal deserves a lot of credit for securing the turf field on very short notice, for the first game of the season. A big thank you to all involved from all the schools for making it possible to one-have the game and two-be able to play at a great facility.

As for the game itself, it was one of big plays by both squads with Cumberland coming out on top by a score of 21-16.

The Knights kicked off to start the game and the defense forced a Pirate punt after just three plays. The offense took over and marched right down the field but Cumberland made a big stop on defense which led to the first score of the game, a 34 yard field goal by Knights kicker, Aaron Likens. ALAH led 3-0 with 5:35 left in the first quarter.

The Pirates scored on two big plays with the first being a 28 yard touchdown run at the 9:54 mark of the second. The extra point kick was good and Cumberland led 7-3. The second big play by the Pirates came with 6:42 remaining in the half on a 62 yard scoring pass and with the EP kick the score was 14-3 in favor of the Pirates.

The Knights’ turn for big plays came next with one on offense and one on defense. Running back Kaden Feagin broke through the defense and scored on a 69 yard run. Liken’s extra point kick was good and the Pirate lead was trimmed to 14-10.

The other huge play was a tackle for loss by linebacker, Max Allen as Cumberland lined up for a field goal with just four seconds left in the half. Max shot through the line and tackled the holder who had fumbled the snap for a big loss as the clock ran out to keep the Pirates from adding to their lead.

The second half saw each team score one more time, again on big plays. The Pirates completing a 59 yard td pass in the third quarter with the EP kick giving them a 21-10 lead.

The Knights’ final score would come on another big run by Feagin, this time a 48 yarder. The Knights went for two in the hopes of being able to tie the game with a field goal but the pass attempt was broken up by the Pirates making the final score 21-16 in favor of Cumberland.

The rest of the half saw both teams turn the ball over on downs three each.

Up next on the schedule for the Knights are Lincoln Prairie Conference foe the Tri-County Titans. The game will be at Wilson Field with kick-off set for 7:00 p.m.