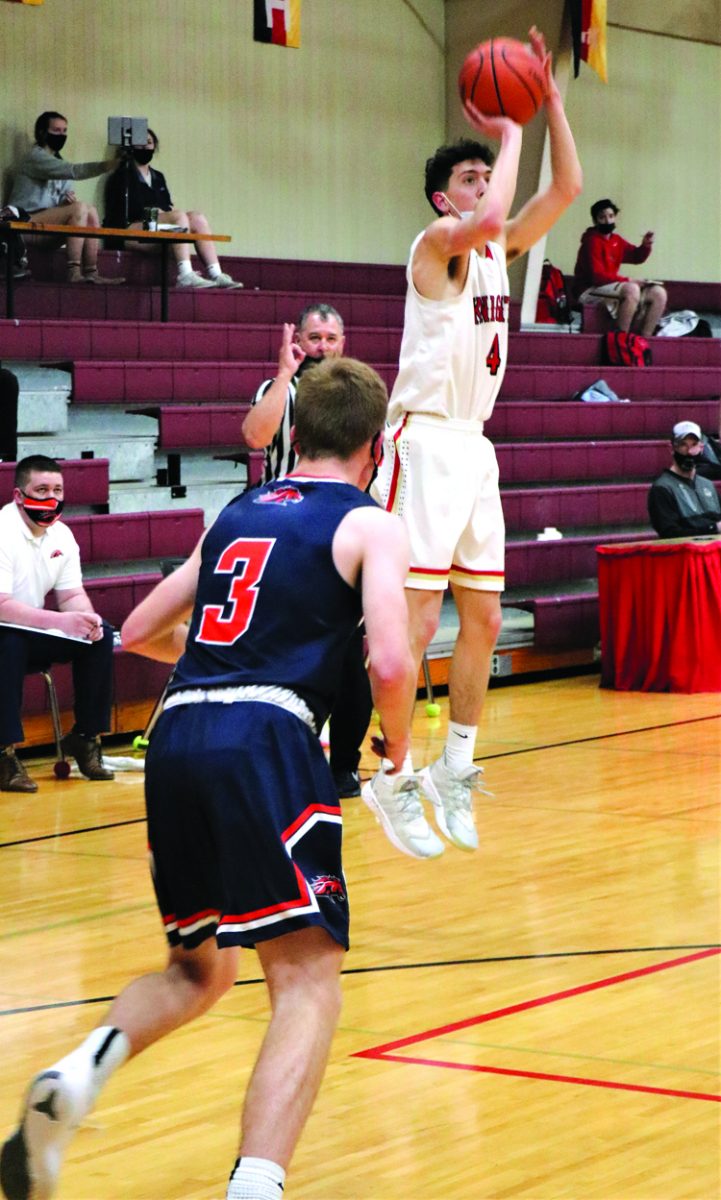 Senior Jamison Rocke pulls up and fires a 3-pointer as Bronco defender Luke Rogers (3) can’t get to him in time on defense. Rocke had a career high 29-point game hitting 5 of 7 3-pointers on the night.

Notching their 9th victory last week in 11 games, the Knights went on the road and fought a tough 2A Clinton team on Tuesday evening.

Outscoring the Maroons 20-6 in the fourth quarter, ALAH defeated Clinton 64-55.

The Knights were led by senior Wyatt Romine’s 19 points and 13 rebounds. Jamison Rocke and Kaden Feagin each added 14 points. Jack Martin had 6 points, Austin Plank with 4 points, Trey Wardrip with 3 points, and Quentin Day and Wyatt Hilligoss each finished with 2 points.

The Knights finished their 2021 home schedule with an 84-54 win over the Cerro Gordo-Bement Broncos. Three Knights scored 18 points or more in the dominant LPC win.

The Knights concluded the 2021 season on Friday night with an exciting OT victory over Warrensburg-Latham by a score of 70-60.

Pacing the Knights was Jamison Rocke with 25 points. Wyatt Romine dropped 18 points and 12 rebounds. Sophomore Kaden Feagin recorded the first triple double in recent memory with 15 points, 13 rebounds, and 10 assists along with 3 blocks and 2 huge dunks. Also scoring for the Knights was Austin Plank with 9 points and Jack Martin with 3 points.

Coach McGill stated, “Thank you to our Seniors for all you have given to the program-Austin Plank, Jamison Rocke, Wyatt Romine, Ben Carroll, Jack Martin, Aaron Likens and Rene Cuevas.”