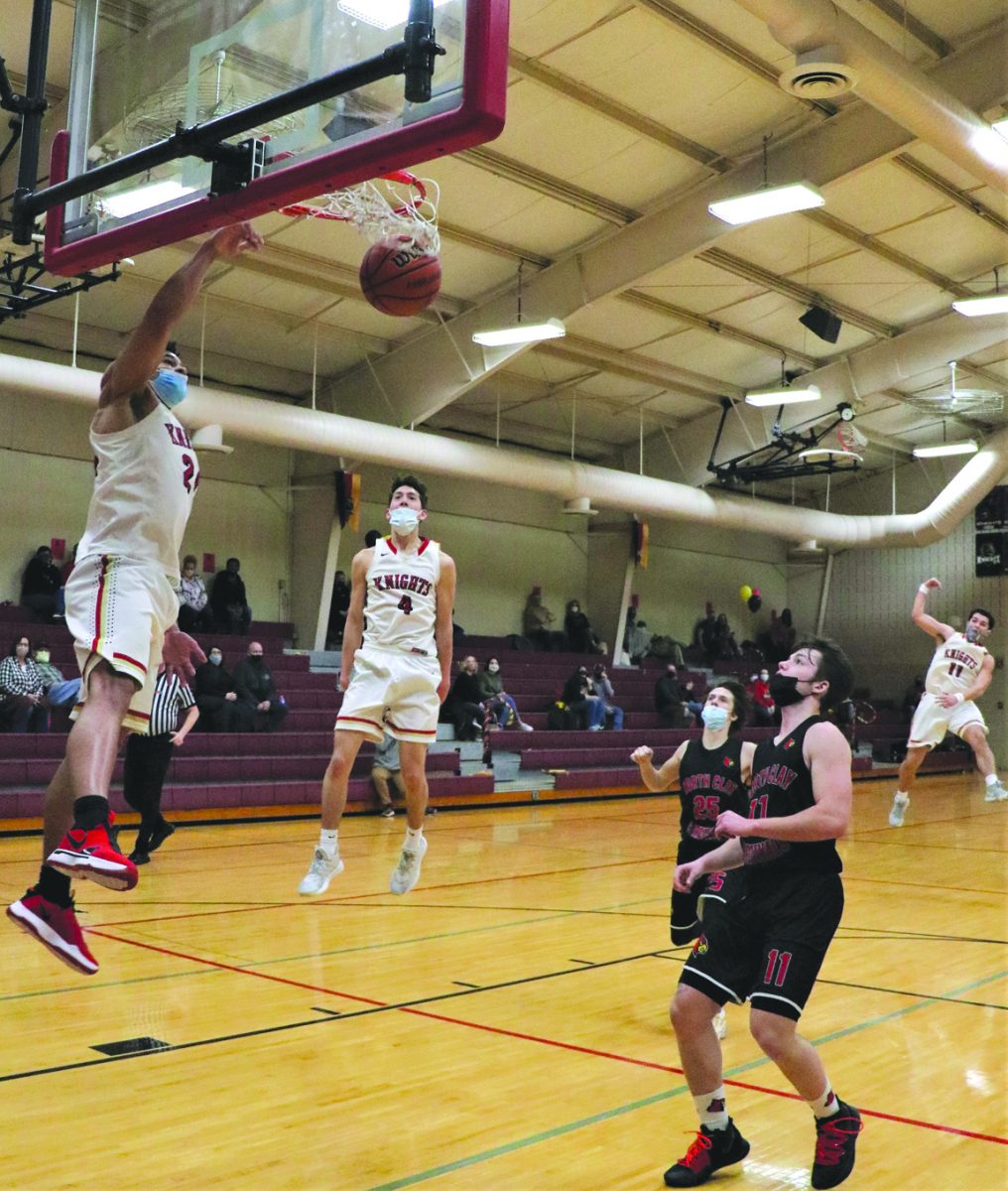 ALAH forward Kaden Feagin goes airborne and slams it home for 2 of his 18 points on the night as teammates Jamison Rocke and Jack Martin watch from behind cheering him on.

The Knights returned to action Friday night after a ten-day hiatus and faced the Cardinals from North Clay High School.

The Knights notched their second win of the season, prevailing on Senior Night by a score of 65-50.

ALAH got off to high scoring first quarter with 21 points and adding 9 points in the second quarter taking a 30-26 lead into the locker room at half. Adding 10 points in the third to North Clay’s 12 points, the Knights continued to lead going into the fourth quarter 40-36. An explosive 25-point final quarter and solid defense throughout proved to be too much for the Cardinal’ to overcome.

The Knights were led by sophomore Kaden Feagin with 18 points, 13 rebounds, and 4 assists. Senior Jamison Rocke added 12 points and 4 steals followed by senior teammate Wyatt Romine tossing in 10 points and grabbing 7 rebounds in the contest.

Other Knight scorers included Austin Plank, 9 points; Jack Martin with 6 points off two 3-pointers; Reggie Edmonds and Trey Wardrip each had 3 points; and Ben Carroll along with Wyatt Hilligoss each had 2 points.

On the defensive side seniors Ben Carroll and Austin Plank added huge efforts on the defensive end of the court. Carroll recorded an impressive 7 steals in the game and Coach McGill stated Plank played the best defensive game of his ALAH career, being named Player of the Game.

The Knights have a busy week as they are on the road at Arcola, Tri-County, and Villa Grove/Heritage before returning home Friday to host Sangamon Valley.

Cumberland was originally scheduled to travel to Arthur but due to quarantine issues they had to cancel which sent Athletic Director Nathan Seal scrambling to find a replacement team.

The North Clay School District is located in Louisville and about ninety minutes from Arthur.