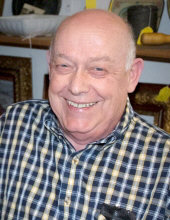 He was born April 29, 1946, in Annapolis, Illinois, the son of Berl and March (Tracey) Bonham, both of whom preceded him in death. He was also preceded by his sister Janet Bonham (in infancy).

He married Mary Jo Newlin on March 17, 1990, and she survives. He is also survived by his siblings, Betty Powell, LaDonna Stant, and Roger Bonham; and by his special nephews, Pat & Donna Bonham and Jon Bonham.

Larry grew up in the Annapolis area and graduated from Hutsonville High School. He would then attend Business School in Champaign, Illinois before proudly serving his country in the U.S. Navy. Upon arriving home, he took to working on the family farm. Eventually, he found employment with Hershey, where he worked before retiring on July 1, 2010.

Time at home often found Larry outside. Anyone who knew him could attest to the fact that yard work in particular brought a great source of pride and satisfaction to his living. When he wasn’t tending to his flowerbeds or in his garden, Larry was known to work on his computer, and also enjoyed working jigsaw puzzles and cozying up to a good book.

Larry was a member of St. Elizabeth Catholic Church.

Due to the public safety measures being enforced by the State of Illinois, funeral services will be private.

Memorial donations may be made to the “St. Elizabeth Catholic Church”.

The Goodwine Funeral Home in Palestine is in charge of arrangements.