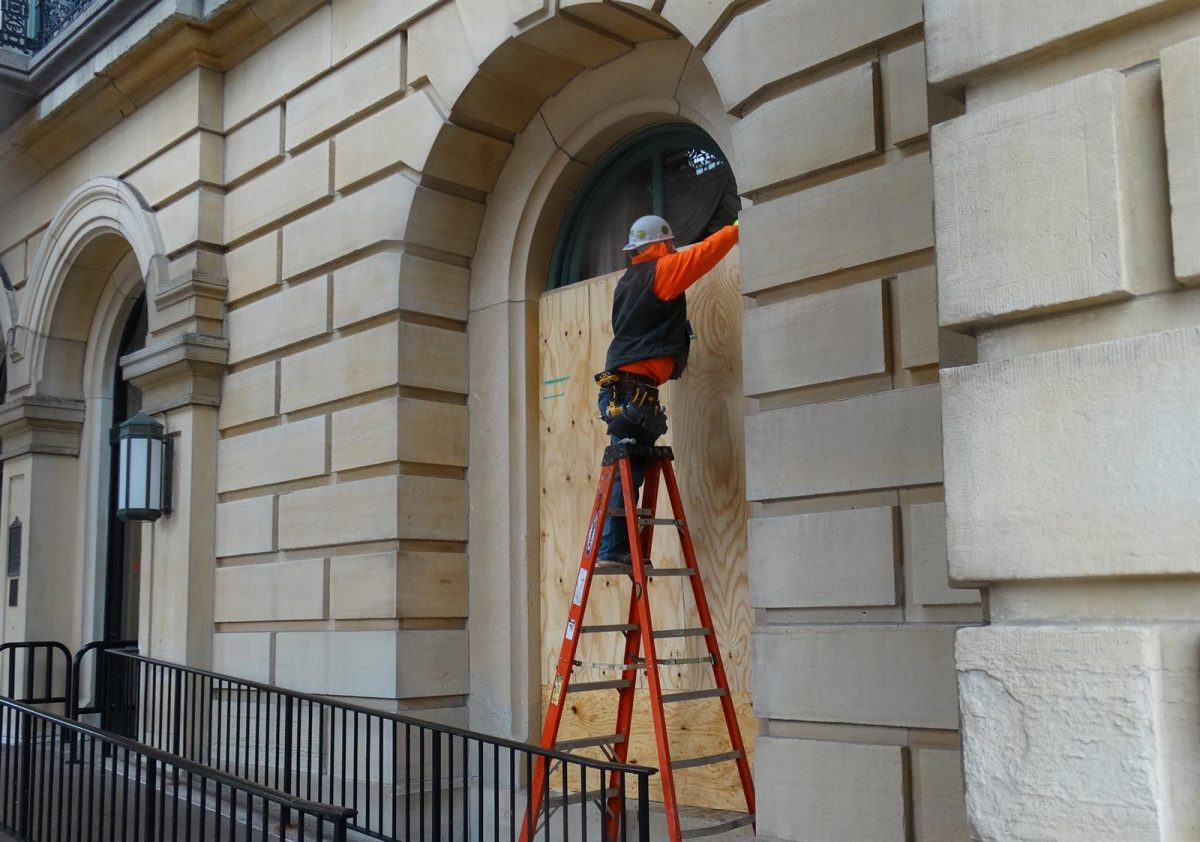 Crews place plywood over windows at the Illinois State Capitol in Springfield on Friday, Jan. 15, amid FBI warnings of potential armed protests across the 50 states leading up to the inauguration of President-elect Joe Biden. (Capitol News Illinois photos by Peter Hancock)

SPRINGFIELD – Gov. JB Pritzker has activated 250 members of the Illinois National Guard amid FBI warnings of potential armed protests at the 50 U.S. state capitols in the days leading up to President-elect Joe Biden’s inauguration.

Crews could also be seen Friday placing plywood over the windows of the Illinois State Capitol building in Springfield.

A news release from Pritzker’s office said the Illinois State Police, Secretary of State Police and Illinois Emergency Management Agency “are working in tandem with local and federal counterparts to protect the residents of Illinois while safeguarding the right to peaceful protest.”

“Following the violent siege at our nation’s Capitol and reports from federal law enforcement on threats to state capitols, I am bringing all resources to bear to protect our residents and our democratic process,” Pritzker said in a news release. “Our exemplary members of the Illinois National Guard will be working closely with our State Police as well as local and federal authorities to keep our capital city safe. We will continue to be fully transparent with the public on any new information and the steps we are taking to respond.”

Henry Haupt, a spokesperson for the Illinois Secretary of State, said no permits were requested or issued for potential demonstrations, but “Capitol Police, along with other law enforcement agencies, are fully aware of possible marches on state capitols.”

“The Illinois Secretary of State Capitol Police remain vigilant to ensure the Illinois Capitol Complex is safe and secure,” Haupt said in a statement. “The Capitol Police continue to work with the Illinois State Police and other law enforcement entities to make sure the complex and surrounding area remain safe. While we don’t discuss staffing levels or security protocols, I can confirm that the Secretary of State Capitol Police are remaining vigilant and taking every measure available to ensure the Capitol Complex is safe and secure. This includes, out of an abundance of caution, temporarily affixing plywood over certain windows of the Capitol Building.”

The governor’s office said the Illinois National Guard “will not interfere with peaceful protestors exercising their first amendment rights,” rather, “the role of the soldiers is to aide local authorities in enforcing street closures and designated perimeters.”

The governor’s office also said Pritzker activated an additional 100 members of the National Guard “at the request of the U.S. Department of Defense” in support of the 59th presidential inauguration in Washington, D.C. The additional troops join approximately 200 Illinois Guard members that were previously activated by the governor.