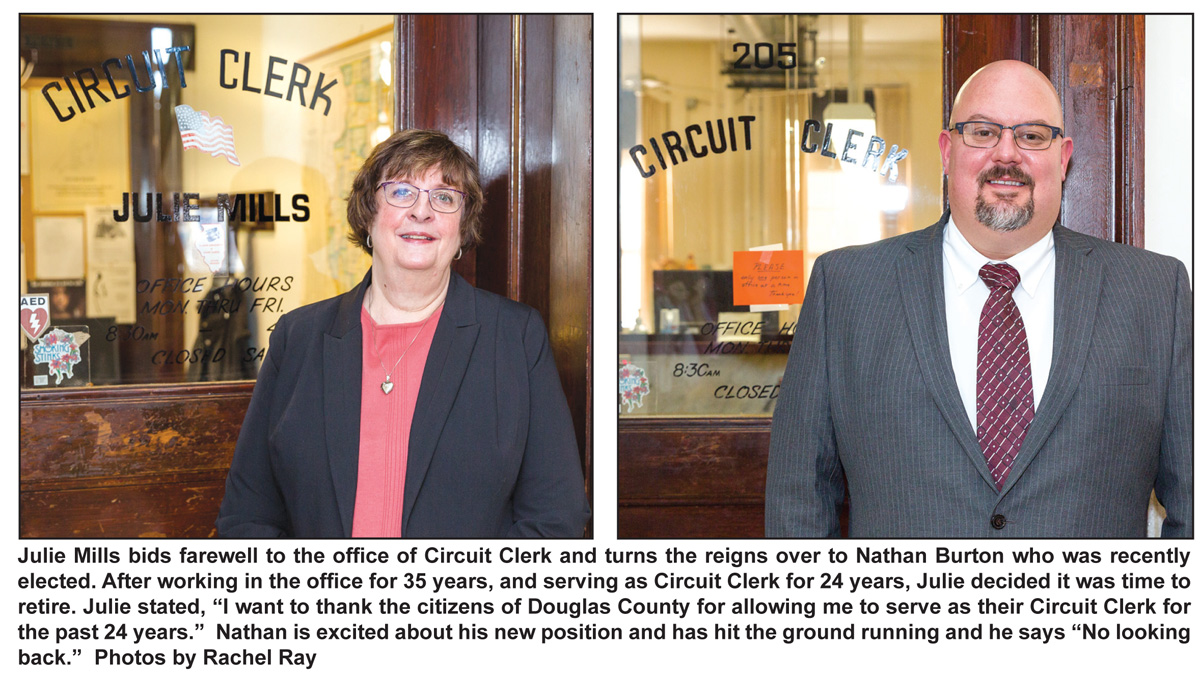 Julia Anne Mills, better known as Julie, retired as Douglas County Circuit Clerk on November 30 after 24 years (6 terms) in the position. Julie actually worked in the clerk’s office for 11 years before running for Circuit Clerk, making a total of 35 years working for the county.

Helen Fortney was serving as Circuit Clerk and asked Julie if she was ready to run in the 1988 election. Julie wasn’t certain she was ready for the job. She had a young son and felt there was more to learn before running for election.

Peggy Beetle served as Circuit Clerk following Fortney in 1988. In 1992 Peggy asked Julie if she was ready to run for election. Julie was still hesitant to run, she felt like she still had more to learn. Peggy retired at the end of her second term and by that time Julie decided it was time. She had opposition in the March primary, but won out and was elected as Circuit Clerk in November, 1996. Since that time, every time she has run for office, she has been unopposed.

Most people don’t realize the enormous responsibilities connected to the job of Circuit Clerk. That may be the reason Julie waited a while to run for the office. She already worked in the office and knew the amount of work required. The Circuit Clerk is the keeper of court records. Anything that goes through the Douglas County Court system has to start in this office. For example, divorce, family cases, traffic tickets, probate cases, small claims and much more.

When asked the worst thing about the job, Julie said it is much more technological now and continues to increase. The office went on computer in 1989. Civil cases now have to be filed electronically. That began in the last few years. The state has recently mandated new case types, effective 2022. For example, there is a change in a divorce case depending whether minor children are involved. “It is just more and more complicated,” says Julie. Douglas County hasn’t gone paperless in the Circuit Clerk’s office at the present time.

Julie has always enjoyed her job, but says the most rewarding was when she was hired as child support clerk. When Mrs. Fortney came into office and Frank Lincoln became the presiding judge for Douglas County, they wanted to have support enforcement. Julie was hired to follow up with people who were behind in child support payments, besides the day-to-day activities involved with child support. Julie says at one point, Douglas County had the highest collection rate in the state. She was getting people the child support they deserve. She says it is good to let people know you care about what happens especially when it involves children.

At one time there was talk about the Federal Government having one collection place for child support for the entire nation. Realizing this was not feasible, Illinois passed a law implementing one distribution center for the state and Julie was on the committee implementing this legislation. It is called the Illinois State Disbursement Unit and is located in DuPage County. Douglas County still receives some payments if people have the money in hand. A weekly report is sent from Douglas County to the Health and Family Service division, letting HFS know which of their clients have received payments through the Circuit Clerks office.

In order to keep an accurate account of who has paid child support, the state generates a daily report of those payments processed through the SDU. The county then loads those figures into the Circuit Clerk’s system. Only a few counties in Illinois do child support enforcement.

However, the Attorney General’s office does have a child support enforcement unit.

Julie says she has left Nathan Burton with a good crew of deputy circuit clerks to work with. The “crew” consists of Stacey Penny, 24 yrs., Mary Ochs, 17, Brandi Luckenbill, 5, Rachel Taylor, 3, and Sarah Hoshauer and Beth Manus, each less than a year. He will have a lot of help to learn the ropes.

Julie married John Mills in October, 1983. He passed away on New Year’s Eve, 2016. They have one son, Bryson and wife Casey also of Arcola. They have two children, Michael 6, and Stella 5. She also has two stepsons, Jason Mills and wife Holly of Tuscola, and Kyle Mills of St. Joseph and his son Logan, an 8th grader. Jason has three adult children. Julie is proud of all their kids and boasted that she became a great grandmother twice this past year.

For the most part, Julie says she has enjoyed her job and feels she has accomplished a lot for the people of Douglas County. However, she agrees with others that this year has been a challenge. She even worked some evenings during the time her office was under quarantine and the Civil side of her office was closed due to an employee with a positive test. She had to go through the Douglas County Health Department to obtain permission to go into the office and work so child support checks and other important work would continue.

She states there have been so many changes over the years and it is a challenge to keep up with, even though it is improving the system. Julie adds that she never got bored with this job; you are always busy because you have to keep up with the changing laws.

Julie says she is going to miss it, but she is going to enjoy having extra time to do whatever falls into place. She stated, “I would like to thank the citizens of Douglas County for allowing me to serve as their Circuit Clerk for the past 24 years.” She was very honored to hold the Bible for Nathan when he was sworn in on December 1.

While Julie will miss the job she has devoted 35 years of her life to, the people she has worked with and those she has helped over the years will also miss her. Thank you, Julie, for your devotion to Douglas County.

Nathan told this reporter that his first day went very well even though he was a little nervous. He agrees that Julie has left him with an excellent staff who welcomed him with open arms.

Nathan won the primary and since July he volunteered at the Circuit Clerk’s office two days a week in order to learn the workings of the office he would soon take over. He worked in the criminal and traffic division. This was right up Nathan’s alley. He is not new to administrative duties, he served as Newman’s Police Chief for almost five years up until November 20.

Nathan states, “I cannot thank Julie enough for all her help. Pieces of the puzzle are falling together. I hit the ground running and I am not looking back. I have the support of Douglas County residents and look forward to working with them for years to come.”