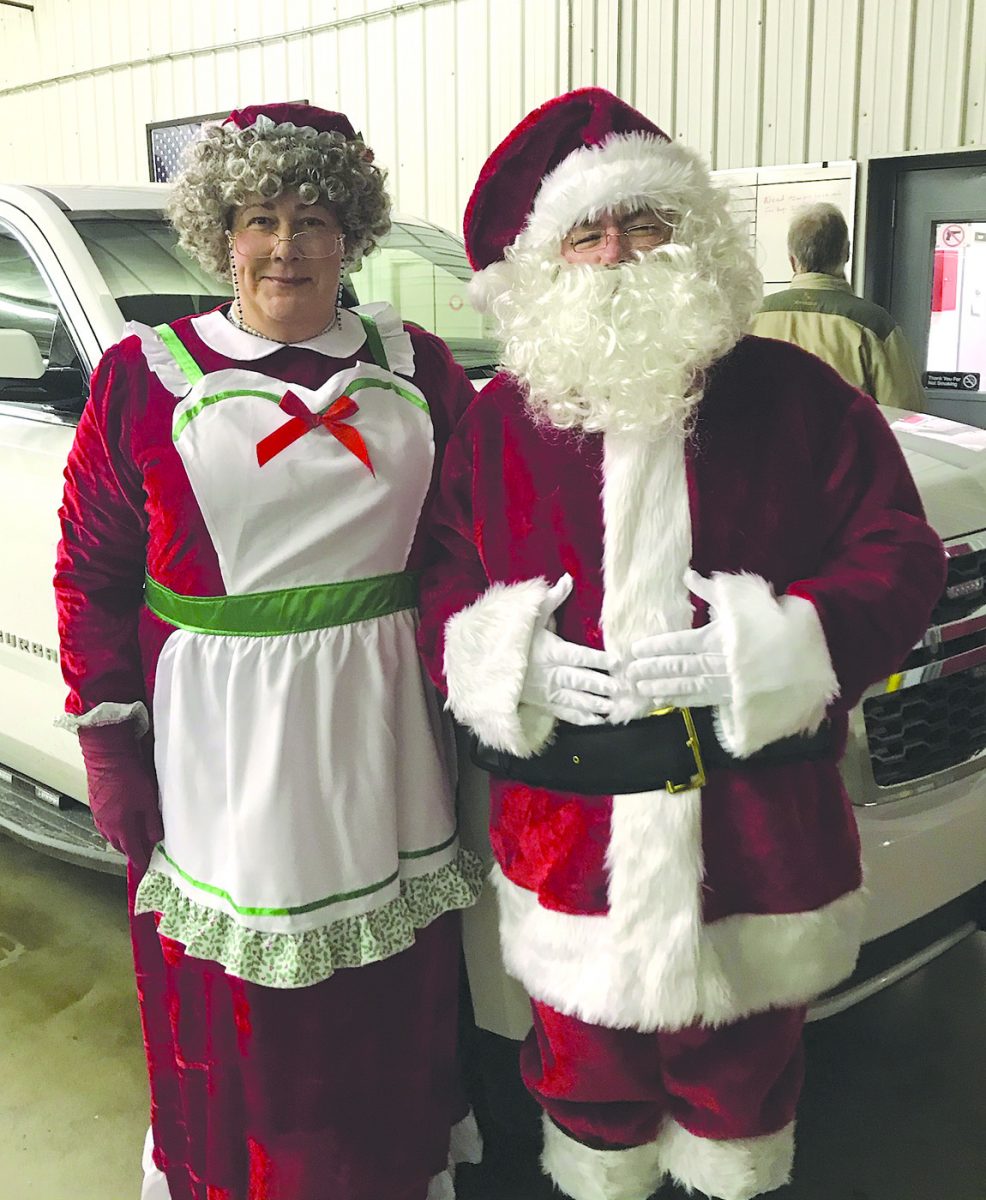 Santa and Mrs. Claus wish everyone a very Merry Christmas!

The magic of Christmas was in the air last Thursday evening, Dec. 10, when Santa and Mrs. Claus made their annual appearance in Atwood to greet the children and collect Santa letters before Christmas.

Santa wasn’t sure just what to do, he wanted to see his Atwood kids, but due to the pandemic he knew he must keep them safe from the virus. He already knew that he couldn’t give them hugs, what was he going to do? Santa enlisted the help of the Atwood Fire Department and the Atwood Chamber of Commerce and thought maybe he could ride on the fire truck and be able to wave to his kids, the next best thing to giving hugs. But what was Santa to do about being able to give the kids a treat? That is where the Atwood Chamber of Commerce came in.

Santa ask the chamber members if they would fix treat bags and hand them out to the kids. Of course, the chamber would do anything to help Santa.

Thanks to Roger Harris who let the chamber use his golf cart, they were able to decorate it with lights and follow the fire truck with treats. This was the first time Santa had ever been in such a dilemma. Christmas was coming soon and he didn’t want to miss his children in Atwood. Santa has enough worries with making sure all the toys are made and each child all over the world gets what they want for Christmas.

Mrs. Claus told Santa not to worry, she knew the Atwood Fire Dept., Atwood Police and Atwood Chamber would not let him down. But just to make sure Santa didn’t get over anxious, she decided she had better come to Atwood too. Besides, Mrs. Claus loves children and she didn’t want to miss a chance to see the kids.

She helps Santa read all the letters from the kids to make sure he gets everything just right. Santa and Mrs. Claus were so pleased with all the Santa letters. She asked if we would share some of the things that the kids ask for this year. There were too many to share them all, but Santa knows what they are.

One letter asked for LOL dolls, hatchimals and Legos, plus tools for her daddy, her cat Sugar a mouse toy and her dog a bone. She also wanted something nice for her brother. Santa thought that was really nice of her to think of others.

In reading over the letters, Mrs. Claus told Santa that one letter wasn’t a Christmas list, but a thank you for Minty the elf. They hoped Santa was doing great and would like a book by Rihanna. What a nice letter.

Another letter stated that they had been good this year because their mom said they had. They like Christmas movies and can’t wait for it to snow. They also wanted Santa to know they will have milk and cookies ready for him and to be safe.

Santa liked the letter where this little boy wanted a dirt bike, R. C. car, I-Phone 7 and a bunch of nerf guns.

Next, this child wanted a real puppy and black and brown boots.

One child admitted that he might have been naughty this year, but he wanted a Paw Patrol airplane.

Some lists for Santa are long and some are very short. This list was fairly long, so I will just name a few. They would like kitty pajamas, Unicorn pajamas, twin baby dolls, new books, Unicorn Barbie doll, matching clothes for her and her doll, to name a few.

Mrs. Claus always likes to read a letter where the children ask how Santa is doing. This child would like an Xbox with a pink controller, sewing machine, art set, LOL dolls and balls, Barbie doll with movable limbs and a cute head, plus more.

Santa thinks this boy is a real football fan. He would like a football helmet, Dallas Cowboys shirt, shoulder pads, Dallas cowboys hat, football holder and Nintendo switch. There was another letter almost the same so Santa wondered if they were twins and liked to do things together.

One letter had a list of several different toys, but their super big wish was an Xbox with two controllers; one pink and one red with Roblox and Minecraft and two headsets.

Mrs. Claus was impressed with one letter from a little girl who wanted a Barbie house, kitchen set, LOL, big Unicorn and for everyone to be in the Christmas spirit. What a wonderful thing to ask for.

One little girl is so anxious for Santa to visit and eat her cookies and fill her stocking. She would like a hunting shirt and pants because she has always wanted to start hunting.

Santa likes music and was glad this little girl wanted an electric guitar and would like for it to be surf green. She told Santa she went hiking or biking each weekend and it was fun and wished Santa an amazing Christmas. Santa wanted her to know that he has had a great year at the North Pole and has kept busy helping the Elves making toys. He also wishes her a Merry Christmas.

Santa and Mrs. Claus were impressed with a letter from a little girl that isn’t asking for anything specific this year, she just wanted to thank Santa for her toys. What a great attitude!

Santa was pleased with all the letters he received and will try really hard to fulfill all the wishes. He was happy with the colored pictures for him and Mrs. Claus and the treats that were given to him. He always loves treats.

Santa wanted us to let you know that if a few people were missed, he was sorry. He asked the fire department and chamber to do this rather last minute and they tried to do the best they could do. It is very hard to get down the streets where the fire trucks have a hard time turning around and if he does this next year, they will work on things a little different. But Santa knows where all the children live and he won’t forget you. He is also working on surprises.

The chamber members told Santa they would have to make more treat bags for next year. The first time doing a Santa parade and distributing treats it is hard to know how many you will need.

But Santa and Mrs. Claus were pleased with all the children and how happy they were to see them. They want to wish everyone a very Merry Christmas and a Happy New Year. He wants you to wear your masks, wash your hands and stay well. He said he is very happy with the Atwood Fire Dept., Atwood Police Chief Rob Bross and Atwood Chamber for helping him out, it was a lot of fun.