On Thursday evening December 3, the season finale for the ALAH Cross Country team was held in the East Gym at the high school. Program was virtual in nature and only team members, coach and administrators were in attendance. Families and friends were able to watch the ceremony via an online link.

Athletic Director Nathan Seal opened the proceedings with comments, and a list of thanks to many in the community including the ALAH administration, transportation providers, and central Illinois media groups. After introductions, Coach Lyle Dorjahn then took to the podium to present awards and commentary.

Dorjahn discussed the girls team in depth. This group accomplished many historic “Firsts” mainly based upon the fact that they were the first girls team to have enough members to score as a team at meets. Their highlights included a 2nd place finish at the Lincoln Prairie Conference Championship, a 7th place finish in Regionals which, during a normal, non- COVID influenced year would have qualified them for IHSA Sectionals. This group of athletes also won 2 quadrangular meets being the first ALAH girls squad to score and win a meet!

Senior commemorative pictures were presented to Makenzie Brown, Mackenzi Bowles, and Layton Hall. The Lady Knights presented Coach Dorjahn with a beautiful framed team picture. On behalf of the entire team, Jace Green presented coach with a certificate for a new “fold – up” bicycle for coach to use at meets and practices.

Dorjahn concluded with a list of thanks to the following individuals and organizations:

Team members Parents, RunGuru Elite (Will Lindgren/Linda Kunasek) for team T Shirts, ALAH Administration for allowing season to take place and for new 10 x 20 tent, ALAH Sports Boosters for team sandwiches at Sectional, Arthur Fire Department for team meal at Yoders after Shazam Championships, Knights Youth Sports Association for Shazam entry fees, Beckmiers for Shazam jerseys, Greens and McGills for screen printing, Tucker Beckmier for coaching at Shazam, Megan Beckmier for all her behind the scenes work all season long, former Rajah Will Lindgren for his motivational preseason talk, former Knights distance standouts Mark Aschermann and Van Dukeman for their preseason practice visits, Sally McCarthy for her unending support of the program, Darlene and Kurt Hall for 7 years of support and helping grow the program, and Sherry Dorjahn for her support and tolerance of her husband’s obsessive behavior and passion regarding Knight’s Cross Country.

This draws to a close an athletic season unlike any in our communities’ history. The Running Knights thank you all for you support throughout the season! 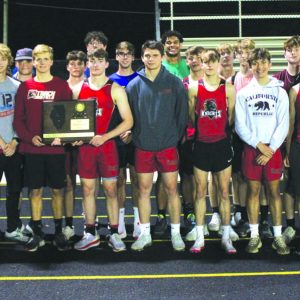 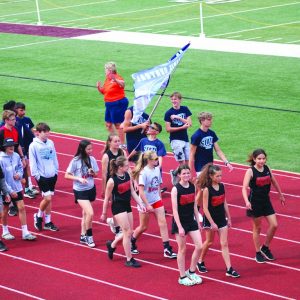