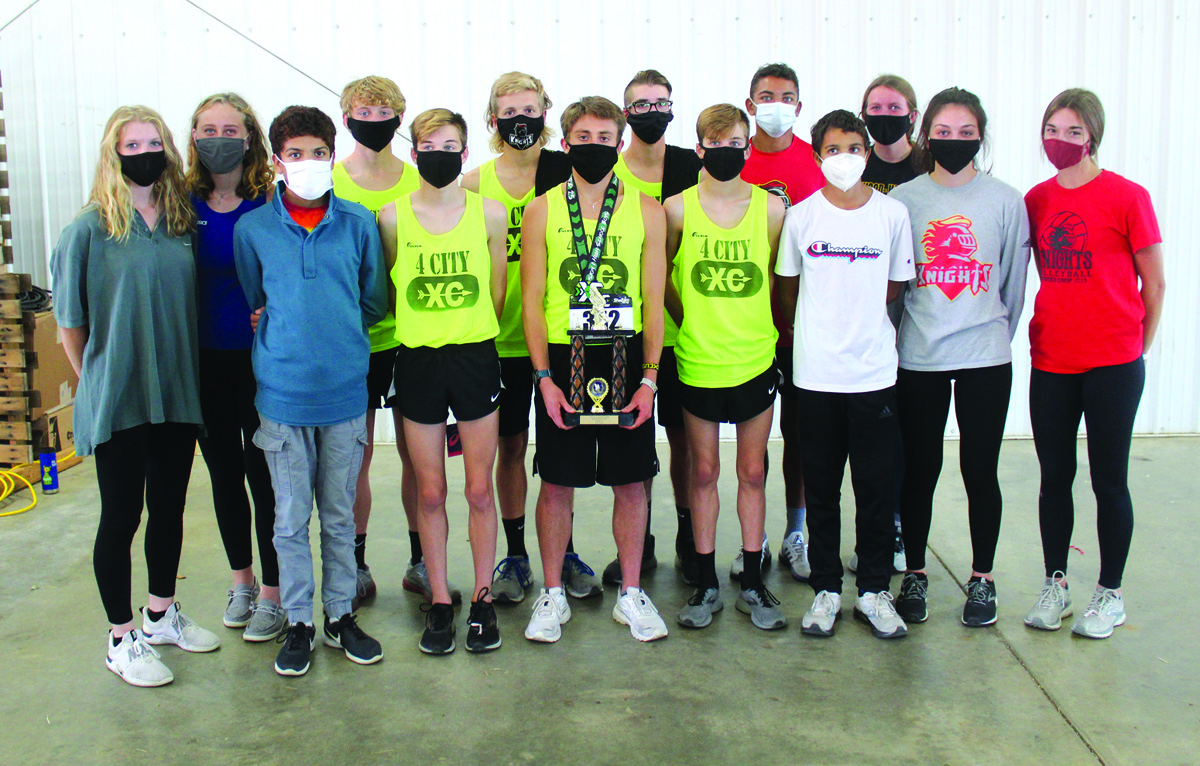 The historic season that was ALAH Cross Country 2020 came to a climactic finish on Friday November 6th. Representing ALAH as the “4 City Striders “ the team took on the state’s elites in this non IHSA santioned, privately sponsored Shazam XC State Championships. Club representation was mandated as the official IHSA season was called complete after the sectional meets last weekend. This Covid related change in no way diminished the quality of the competition as the top 20 ranked teams statewide toed the start line in 4 separate flights.

On an unseasonably warm November afternoon, our locals ran off into sunny skies with temperatures in the 70’s and a warm southern breeze at 10-15 mph. The course laid out at the excellent Three Sisters Park outside Chillicothe was a challenging 5 kilometer venue featuring undulating hills, wooded trails and changing, uneven footing of grass, rock drives, and areas of Illinois River bottom sand. Our mates hadn’t been challenged with this type of topography since the Cow Chip Classic held Labor Day weekend.

Running in reversed flight order than what has been done throughout this Covid challenged season, Jacob Duzan and Reggie Edmonds led off for the Striders. These two completed their rookie XC campaigns favorably against the states best 6/7 runners and set a competitive tone for their mates.

The fireworks really began in the second flight featuring the 4 and 5 runners from across the state. Jace Green hammered away from the start with Jacob Adcock in tow. Leading at every scoring pad check point, Green pulled away from the field with a dominating 8 second win. Jacob Adcock finishes 3rd to complete Strider scoring. Green’s race of the year and Adcock’s dogged determination got the attention of all of the state’s running guru’s and media specialists. Their efforts would turn out to be monumental in the final results.

Logan Beckmier and Lyle Adcock lined up for the 3rd flight of 2 & 3 runners from the respective squads. Runners from Benton and Harvest Christian got out to a big lead from the start. This proved too much for the local harriers to overcome. Finishing 7th and 11th, Beckmier and Adcock would end up being the Striders 2nd and 4th top finishers

In the final flight, Senior stalwart, Layton Hall hit the start line with the elite top end runners from across Illinois. In a thrilling run to cap off a brilliant career, Hall travels the challenging terrain in the lead group to place 5th in his flight and 5th overall. To make the week complete, Hall announced his commitment on Thursday to spend his next 4 years in Terre Haute, IN competing for Indiana State University! Layton was also named WCIA Athlete of the Week after garnering the same honor from WAND the week prior.

The ALAH Cross Country team completed what has been an incredibly historic season. This group was challenged in preseason with the concept of being state champions. Their season was then placed in jeopardy by Covid restrictions. Their season was allowed to happen but all the major meets they normally run were canceled or severely changed to comply with IDPH standards. This group was challenged to build a resume’. To compete at a high level against the state’s best week after week. The squad wins an unbelievable 10 meets! Their 4 losses include a 2nd to Olympia by 20 points in week 1. A 2nd to Regional winning Shelbyville by 13 points while running the Knight’s “JV” team for them to gain experience. A 2nd at St. Teresa Invite while their year long #2 runner sat out in quarantine. And finally, a 2nd place runnerup finish in the Illinois State Championships to perennial powerhouse Harvest Christian Academy of Elgin.

Repeating as Lincoln Prairie Conference Champs, Regional Champions, winning the school’s first Sectional Championship, and finishing as State Runnerup, this season is absolutely one of the best athletic accomplishments in our four communities’ athletic histories of ALL sports.

Hats Off and Congratulations Knights Cross Country. Proud of ya!