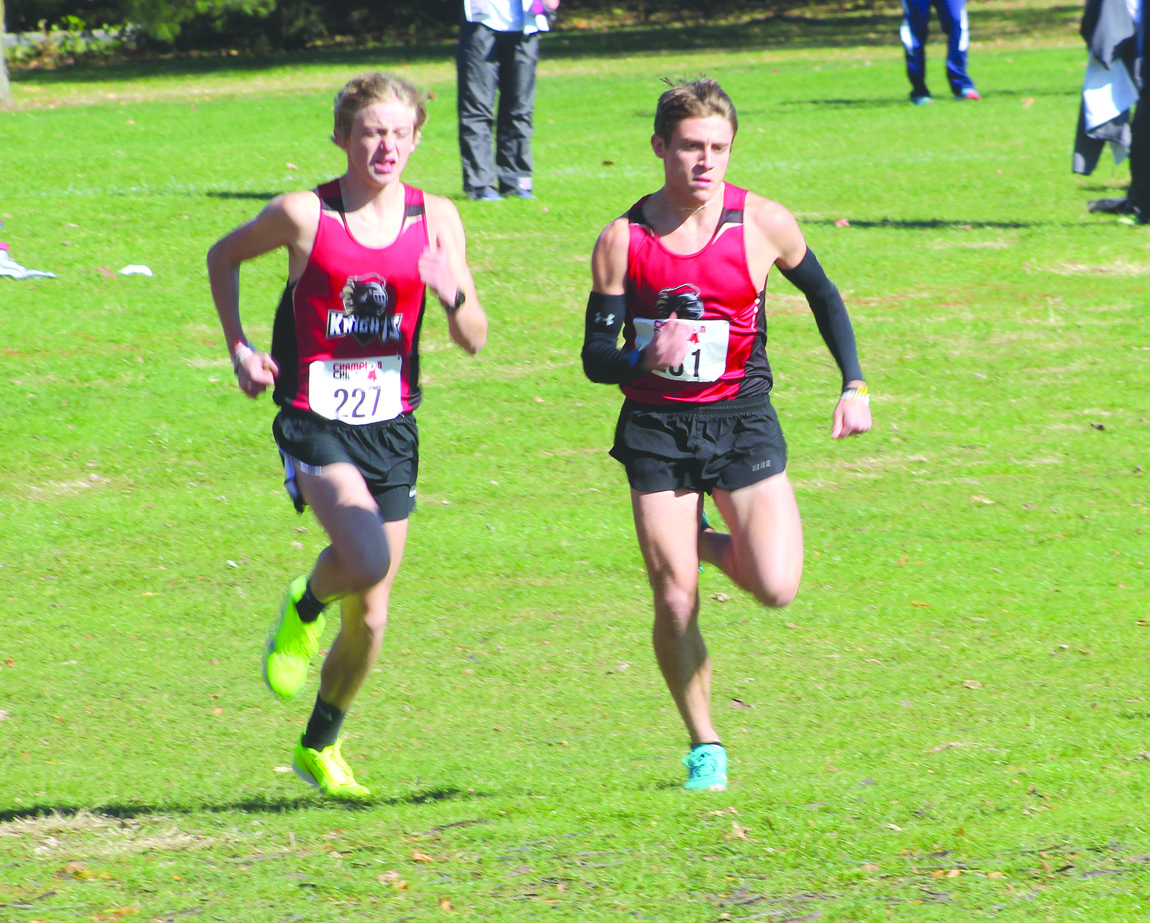 Logan Beckmier and Layton Hall take off at the start of the I.H.S.A. Sectional Cross Country meet at Hickory Point Golf Course on Saturday, October 31. Layton would go on to win the race and finish his I.H.S.A. career as the Sectional Champion. Logan also earned a medal by taking fifth place and was the first sophomore to cross the finish line.

For the first time in school history the ALAH Knights cross country team are IHSA Sectional Champions. The state’s #5 Class 1A team returned to Hickory Point Golf Club for the second week in a row. The Knights harriers again ran with familiar foes from SJO and Monticello. A total of 15 teams and 15 individuals from the Indiana border to the Metro East area gathered for one of the state’s toughest sectionals

Running the now familiar 3 flight format, the Knight’s Layton Hall and Logan Beckmier lined up against the #1 and #2 runners from the other regional qualifying schools as well as the individual qualifiers from 3 regionals that fed the St. Teresa Sectional. On a beautiful sunny 50 degree noon start, the competitors ran into a 15 – 20 mph south wind for the better part of the first mile. Tyler Guthrie from Father Mcgivney HS of Glen Carbon challenged Hall for the first half of the flight. Beckmier hung close along with runners from Monticello and Eli Mojonnier from BHRA. Just before the 2 mile mark Hall broke free and pushed to a dominating win in 15:27.6. Guthrie goes 2nd some 16 seconds behind. Beckmier finishes 5th in 16:02, but more importantly from a team score standpoint, splits Monticello’s 1 and 2 runners.

The second flight featured each schools 3, 4, and 5 runners. Toeing the start line for the Knights were Lyle Adcock, Jacob Adcock, and Jace Green. Running in a tight pack, the trio from ALAH forged the pace at the front of the lead group at 1 mile. At 1 ½ miles things were still close.

Just before 2 miles, Lyle Adcock made a monster surge to run away from foes from SJO and Monticello. He wins the flight and finishes 10th overall. His brother Jacob runs tough and PR’s for the 2nd week in a row finishing 18th overall. Jace Green runs a gritty race while dealing with allergy issues. While slower than 1 week prior, his 38th place finish was enough to secure the first sectional title for the Knights.

Reggie Edmonds and Jacob Duzan have top 5 finishes in the final flight both running excellent times of 18:22 and 18:44 respectively. Having their rookie season under their belts, these two will be consistent scoring contributors in the 2021 cross country campaign.

Final standings showed ALAH with 62 points followed by SJO with 76 and Monticello with 82. Unity and Robinson rounded the top 5 schools with 120 and 191 points respectively.

The Knights would like to thank the Arthur Fire Department for escorting them through town the last two Saturdays and the ALAH Athletic boosters for the post race sandwiches!

Having now won an astounding 10 of 13 meets in 2020, this group now sets their sights on the Shazam Racing State Championships on Friday November 6th. This event came about as a season ending replacement race after the IHSA canceled their traditional state meet at Peoria’s Detwiler Park. As the IHSA season is officially over, the Knights will be running as a “club” team. At the time of this writing, it appears that most of, if not all of the state’s elites will gather at Three Sisters Park for the Covid19 version of the Illinois Championships. This event will include the top 20 teams and top 25 non-team individuals from throughout the state.