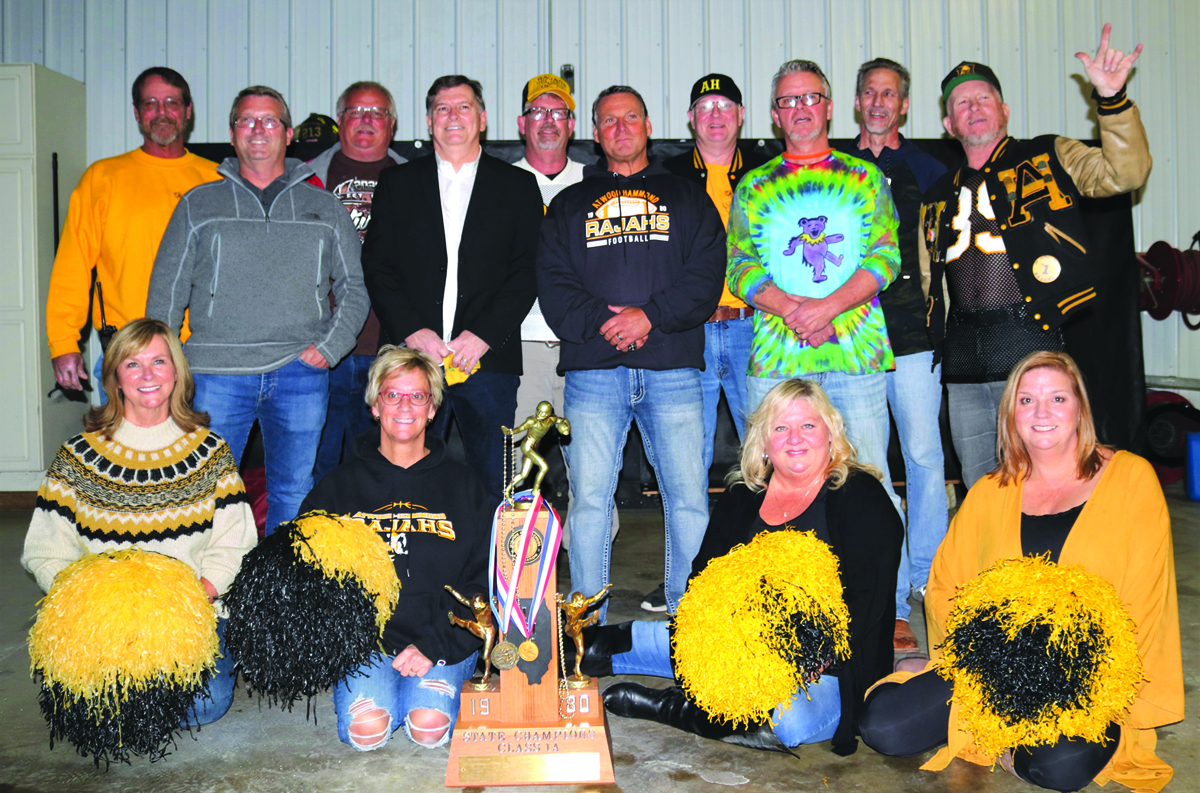 Talk about time flying, it was so great seeing some of the football team and cheerleaders and students who were in school when the A-H Rajahs won the Class 1A State Football Championship in 1980. Between 40 & 50 Rajah alumni attended a 40th reunion at the Arthur Firehouse on Saturday, Oct. 24.

The championship game was replayed on a large screen for the students to relive their glory days. It was a great time for the school, but an even greater time for the A-H school district residents. Many of our readers probably remember the great game and all the hype that followed afterward.

The following article appeared in the Atwood Herald on Nov. 27, 1980. The game was played on Nov. 21. We thought you might like to read it and bring back the memories of that glorious time.

The Atwood-Hammond football season came to a spectacular climax on Friday as the Rajahs won over Lexington 17-16, earning them the title of Class 1-A State Football Champions of 1980. Even though Atwood-Hammond was the underdog for every game, the Rajahs showed the state who the champions were. All season the team has agreed they have been like comedian Rodney Dangerfield, “Just get no respect.” Lexington Coach Jim Mannaioni stated in the press conference following the game, “I don’t know if they were the best team we’ve played, but we’ve never played a team that wanted the championship more than Atwood did. They had more heart.”

After Lexington closed within one point, 15-14, a Rajah turnover led to an A-H score. Rick Conner’s pass was intercepted by Lexington’ Rick Patton at the Lexington 2. On the second down from the 3, Freed tried to pitch the ball to Randy Winterland who fumbled and fell on the ball in the end zone for a safety that proved decisive.

At the press conference, Coach Lyons stated, “I didn’t think it touched a ball player at all, but I didn’t argue with the officials.” The officials agreed. Rajah had possession at it’s 7, but three plays lost 4 yards to set up a crucial punt.

Whightsil caught the ball and knelt in the end zone for the safety that made it 17-16 with 1:59 minutes left in the game.

Lyons stated, “We figured that with the kickoff from the 20 instead, we could move them 20 yards farther back. Also, Whightsil has bruised ribs, and Mike Sawyer, my kickoff man, is healthy.”

Sawyer got off a 40-yard kick and Lexington was forced to take over on its 47. Lexington’s only pass of the second half fell incomplete and the Rajahs ran out the clock.

Lexington coach said it had been a guessing game from the beginning. When Lexington set up their best play, the Rajah’s best man was always there.

Coach Lyons said that in their previous scouting of the Lexington team, they had been a running team, not any of the “razzle dazzle” in passing they showed Friday. “I imagine they out-statted us again,” said Lyons, “but who cares as long as the points are on the scoreboard.”

And the points were on the scoreboard, the A-H Rajahs, also known as the “Cardiac Kids” showed all the sportswriters that they were not the underdog as they had been rated but are NO. 1.

Atwood won all four of their playoff games by narrow margins with a total of 22 points. Other scores were Jacksonville Routt 18-12; Martinsville 14-0; and Roseville 35-34 in an overtime.

The crowd went wild as Earl Adkisson of the Atwood Air Farce flew over the stadium all during the second half with a banner reading “Rajah Pride Is on Our Side.” Gas for the plane was furnished by donations of area people.

During this time of uncertainty in 2020, remembering the 1980 state win brings back positive memories to all of the communities.