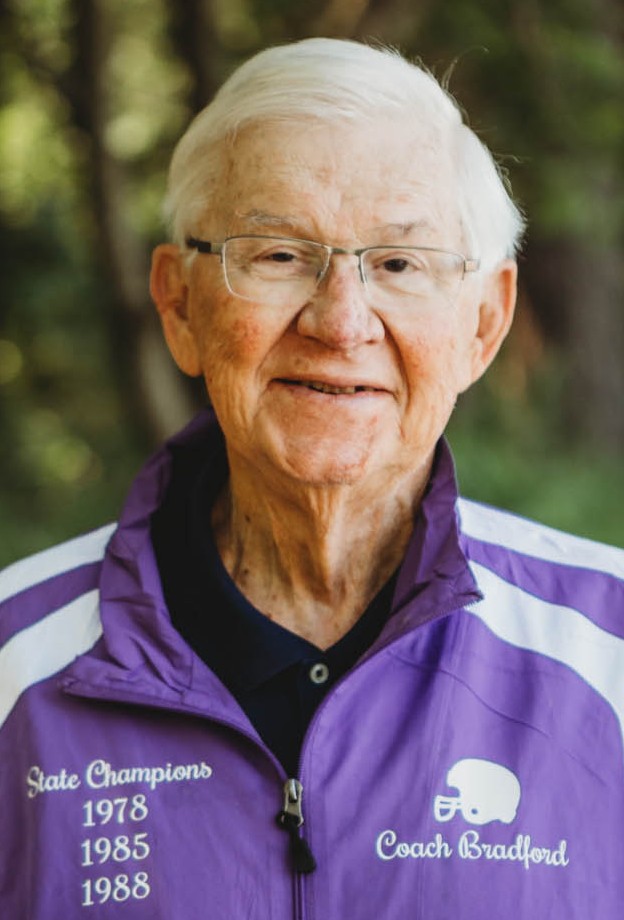 On Wednesday, October 14, 2020, Byron Lloyd Bradford, father, father-in-law, grandfather, brother, coach, and teacher passed away at the age of 81 years.

Byron was born October 20, 1938 the son of Chase and Joyce Bradford. He lived in Hindsboro, Illinois area his entire life. While a student at Arcola High School himself, Byron was a center on Lou Baker’s undefeated football teams of 1954 and 1955. He was also involved in the class play, Torch yearbook staff, Lettermen’s Club, Arco-Lite, and FFA. He spent much of his after school and summer time working on the farm with his father Chase, riding his horse and spending time with his neighbors, the Strader boys. After graduation Byron attended Eastern Illinois University where he got his bachelors and masters degrees in education. Byron and Jean Miller, also of Central Illinois, were married on March 30, 1958. Together they made a life full of friendships and memories, many consisting of their family, especially daughter, son-in-law, grandchild, and great grandchildren, church functions, hosting gatherings, and of course, Arcola football.

Byron began his teaching and coaching career in Arcola in 1961 and was a teacher and coach at Arcola for forty-nine years. During that time he taught 6th grade, junior high math, social studies and P.E. He also coached basketball and track. As a high school teacher he was an instructor of drivers education, health, P.E. and served as a guidance counselor. His high school coaching included football, basketball, baseball and golf. He and his mentor and best friend, Bob Avery, coached the legendary AHS basketball team in 1963-1964.

He also coached football with Steve Thomas, creating a dynamic duo and wonderful friendship as they took teams to the state championship game in 1977, 1978, 1985, 1988 and 1991. Byron helped lead the Purple Rider football program to state championship wins in 1978, 1985 and 1988.   He also came out of retirement in 1995, coaching with Joe Marks, taking the team to the state championship.  They got runner-up.  Byron always said that he was fortunate to not only coach with talented coaches but also to coach talented boys.  It was no doubt that Byron had a passion for Arcola football and for the town as a whole. He retired from Arcola High School in 1994, but stayed on part time until 2010.

Although Byron is known for his coaching history, the impact he had on his family, friends, students and the Arcola community goes much deeper than the football field. Byron was a man of faith, integrity, strength, drive, and patience. He had a deep desire to help others, and he did so every chance he was presented, showing God’s love to all he encountered. His leadership also served him well as an elder, lay preacher, and Sunday school teacher. He was presently attending Truth and Grace Fellowship church. Although Byron was seen wearing purple the majority of his life, in recent years, he was also known to sport red and black for the Highland Bulldogs, where his granddaughter, Nicole, teaches. He loved spending days with his daughter, Marla, driving through the country, running errands, and visiting with friends, watching his son-in-law, Tony, drag race, visiting Nicole and her husband, Gabe, in Highland, seeing his great granddaughter, Peyton, dance, and watching his great grandson, Beckett, grow and play.

He continuously demonstrated the characteristics and traditional values that made him a wonderful role model to hundreds of young men in sports, students in the classroom, for other teachers, as well as the entire community. He earned the respect of players, opposing coaches, and his peers through his deeds, actions, character, and guidance. He had developed a close friendship with current AHS football coach, Nick Lindsey, who he thought so highly of, and whom he knew will continue on the Arcola football program traditions with dignity.

Byron will forever be remembered by his daughter, Marla Chrisagis and husband Tony of Arcola, Illinois, granddaughter, Nicole Zuccarelli and husband Gabe, great granddaughter, Peyton (4), and great grandson, Beckett (1.5) of Highland, Illinois. Byron will also be remembered by his brother Harold Bradford and his wife LeeRae, brothers-in-law, Terry Miller and wife Catherine, and Ed Miller and wife Cheryl, as well as numerous nieces, nephews, and the entire Arcola community of friends, who are more like family. As recently expressed from one of his former football players, “Coach may have only had one daughter, but he had two thousand sons.”

Waiting for Byron in heaven were his beloved wife, Jean, his parents, Chase and Joyce Bradford, and two of his very closest friends, Bob Avery and Steve Thomas.

A celebration of Byron’s life will be held at 7:00 pm on Friday, November 6, 2020, at the Thomas Bradford football field at Arcola High School. In honor of Byron’s Purple Rider pride, wearing purple attire is welcomed. Pastors Kevin Wolfe and Jeremy Morton will be officiating.  Shrader Funeral Home, Arcola, is assisting the family with arrangements.

In lieu of flowers, it was Byron’s wish, as an expression of sympathy, that memorial contributions be made to Nicole Zuccarelli to be used for his great grandchildren’s college funds. The family will also be making a contribution to the Arcola High School football program, of which details will be arranged at a later date.