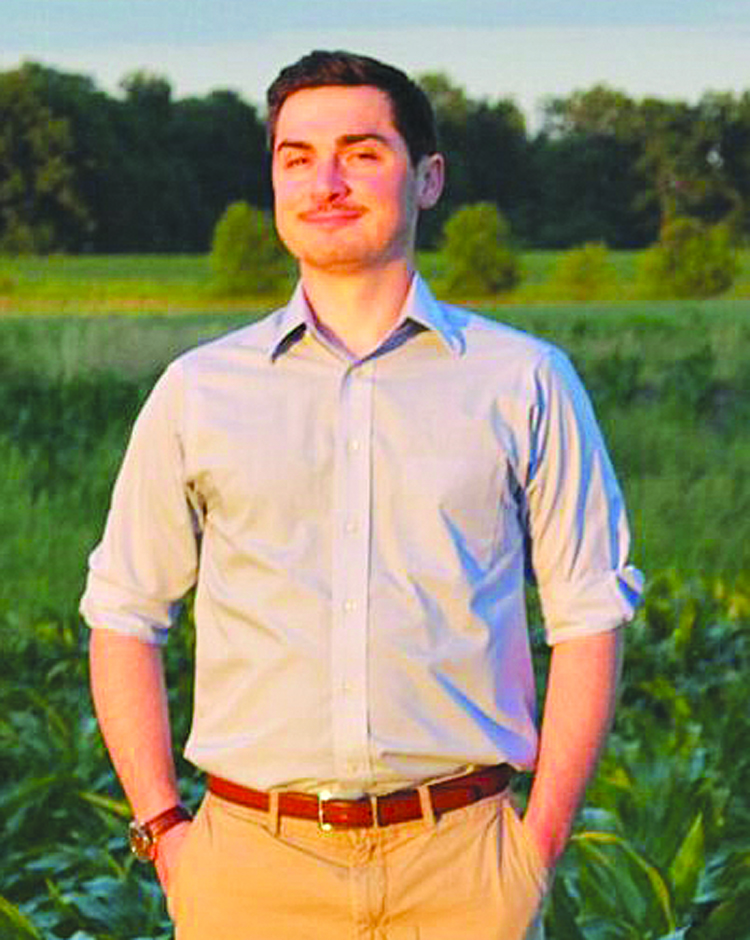 “Government and politics touch every corner of our lives. Healthy government is critical to our wellbeing and happiness as citizens of this great country. When the government is functioning properly we notice it helping in our daily lives,” quoted Mitchell Esslinger, who is running for Illinois House of Representatives.

Esslinger was born in Champaign and raised in Strasburg where he attended Stewardson-Strasburg High School. Esslinger then attended Lake Land Community College and the University of Illinois. Growing up, he has done a variety of jobs which has shaped him into the person he is today and it has had a hand in developing the views and opinions of the economy and government.

According to his bio found on his website (https://www.mitchellesslinger.com), at the University of Illinois, he worked with local law enforcement to protect student safety. As a renovator, Mitchell started at the early age of 12 working for his family’s rental properties. As a tutor, he saw the importance of giving our schools what they need to help our children succeed. He keeps busy with his family’s centennial farm and helping care for a family friend’s autistic son. In doing so, he has seen how families struggle to get the care they need and decided to change that for hard-working people in our district.

But not only did his past job and volunteering experiences help him decide to become active in government, a tragic story involving his father’s struggles for healthcare and quality of life, also aided in his decision to run.

“Back in 2012, my father, who proudly served this country during the Vietnam War, had a massive heart attack. He had to be airlifted to Carle after Sarah Bush could not treat him, and had to be resuscitated at least once in transit. He spent weeks in the hospital recovering from the damage to his body, and unfortunately, the VA covered very little of his medical costs. Two years later, in April 2014, my father, feeling failed by our institutions and suffering from crippling medical debt coupled with major depression from open heart surgery, took his own life in front of my brother. Since that moment, my family has never been the same. My father had felt unheard, unseen, and unrepresented. He had been failed by our systems that he was told would protect him. He felt as if he had just been cast aside and forgotten,” recalled Esslinger.

“Going through this incredibly painful time showed me the human cost of our flawed institutions, and I have wanted to fight to fix them ever since,” he added.

In his interview, Esslinger said that he has had an interest in politics ever since he was a young child. As he remembered his childhood and school days, he had a bit of a small story to tell.

“I remember arguing with my 3rd grade teacher that the Supreme Court should not be involved in deciding the outcomes of elections. In 5th grade, I used to draw political cartoons in my spare time. In 7th grade, I went over to the UK through a program started by President Einsenhower called People to People, which is designed to strengthen our bonds with our allied countries. In high school I was attending Rotary programs designed to help further students in business and government. Once I got into college, I finally got my chance to work on presidential campaigns,” Esslinger told. He continued. “Earlier in my life, growing up around everyone getting angry at politicians, I actually always felt ashamed for being so interested in politics and government. However, I would always wonder, why is it that these government officials cannot do the one thing they are paid to do and work for the people of Illinois?”

Being that healthcare has been an important and even personal issue with Esslinger, he also spoke about today’s pandemic and his take on how the government has handled the situation.

“I disagree with the way our government has dealt with this pandemic. I believe that there is much more to be done for our essential workers, individuals, and families with pre-existing conditions. I believe it is crucial that Illinois covers medical treatment related to COVID-19 for essential workers and those who have lost their jobs until at least April 2021. We also need to make sure people can stay in their homes right now, and I support a rent and foreclosure moratorium, and no water or electricity shut-offs until April of 2021,” he stated.

“We have all seen the photos of the shanty towns during the Great Depression – that is not a reality I want for my district. We also need to cap prescription drug costs so that families who are already struggling don’t have to ration their medication or go without entirely,” he added.

One last issue that Esslinger felt important to add was one that his opponent, Brad Halbrook is trying to pass: the bill stating that Illinois will separate from Chicago and Chicago will become the 51st state.

“On its face, this bill is ludicrous even from a Republican perspective. Firstly, it’s unconstitutional, and I was under the impression that conservative values emphasize the importance of liberty and the Constitution,” he said. “I encourage anyone interested in this issue to read the SIU Paul Simon Public Policy Institute report on Public Budgeting, as it clearly outlines that for every tax dollar Cook County sends to Springfield, it gets about $0.90 back. For every dollar our counties in Central Illinois send to Springfield, we get back roughly $1.87 on average! If we entertain this idea of cutting Chicago out of the state, this means we would see our taxes likely doubled,” Esslinger explained.

As of recent, Esslinger has moved his campaign headquarters to right here in Arthur at his family’s inn. “We encourage anyone to reach out to our campaign on our website if they want yard signs, if they want to donate, or if they want to volunteer to join our fight at www.mitchellesslinger.com/volunteer. “ he informed.