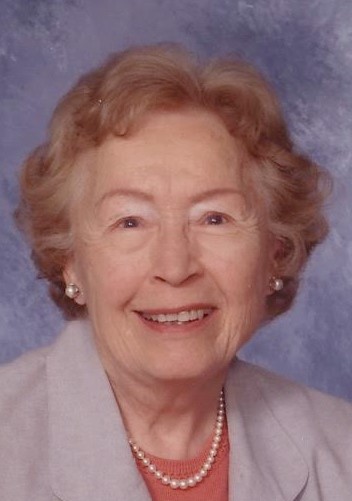 Helen Zips Fry Ayers departed this life on the evening of Sunday, August 16, 2020 at the Villas of Holly Brook in Monticello.

Helen is survived by four stepchildren, James (Linda) and Stephen (Marilyn) both of Monticello, Robert (Christine) of Monmouth and Betty (Phil) Comerford of Larchmont, NY; eleven grandchildren and twelve great grandchildren. She is also survived by five nieces and five nephews and her sister Josephine Zips Cable. In addition to her husbands, Helen was preceded in death by her parents, stepson William, siblings Franks Zips, Rose Zips Behrhorst, Edward Zips, and Cecilia Zips Costlow.

After graduating from the University of Pittsburg in 1943, Helen began her career as a high school English teacher, followed by a business career working for a steel company, accounting firm and as a gemologist for J.C. Keppie in Pittsburgh. When her husband, Thomas Fry, moved to Illinois to join the InterScience Research Institute at the University of Illinois, she become involved in the Urbana-Champaign community. Helen first worked as a secretary and later as a writer in the Office of Agricultural Communications at the University of Illinois until she retired as an Assistant Professor in 1975. Her boss, Professor Hadley Read, introduced her to A. Richard Ayers, a friend and former staff member of the University of Illinois Ag Extension. They were married on September 29, 1973 in Champaign.

After moving to the farm in Bement with Richard, she started a new chapter in her life. She continued to be involved in the Kappa Alpha Theta Alumnae Club and the U of I University Club. She also became a Director and Officer of Central Illinois Manufacturing Company in Bement, a company formed by Richard. She and Richard traveled frequently combining business and pleasure. One of her biggest projects was saving an 1897 Victorian Building on Bement’s Bodman Street and opening a Ben Franklin Variety Store combined with the Village Shop Women’s Apparel.

She was a member of St. Michael’s Catholic Church serving as a trustee and long-time religious education teacher. She loved to sing and was a member of the Monticello Summer Singers. She was also active in the Bement’s Women’s Club; Piatt County Republican Women; Kirby Hospital Auxiliary; PEO; and numerous other organizations and boards. When asked by her friends about living on the farm, Helen responded, “My life is full, I’m busy and happy and thankful that I was blessed with a ‘second time around’.”

Due to COVID restrictions, a private service and burial were held. Aaron and Susie Hinds have the honor of serving the family of Helen Zips Ayers.