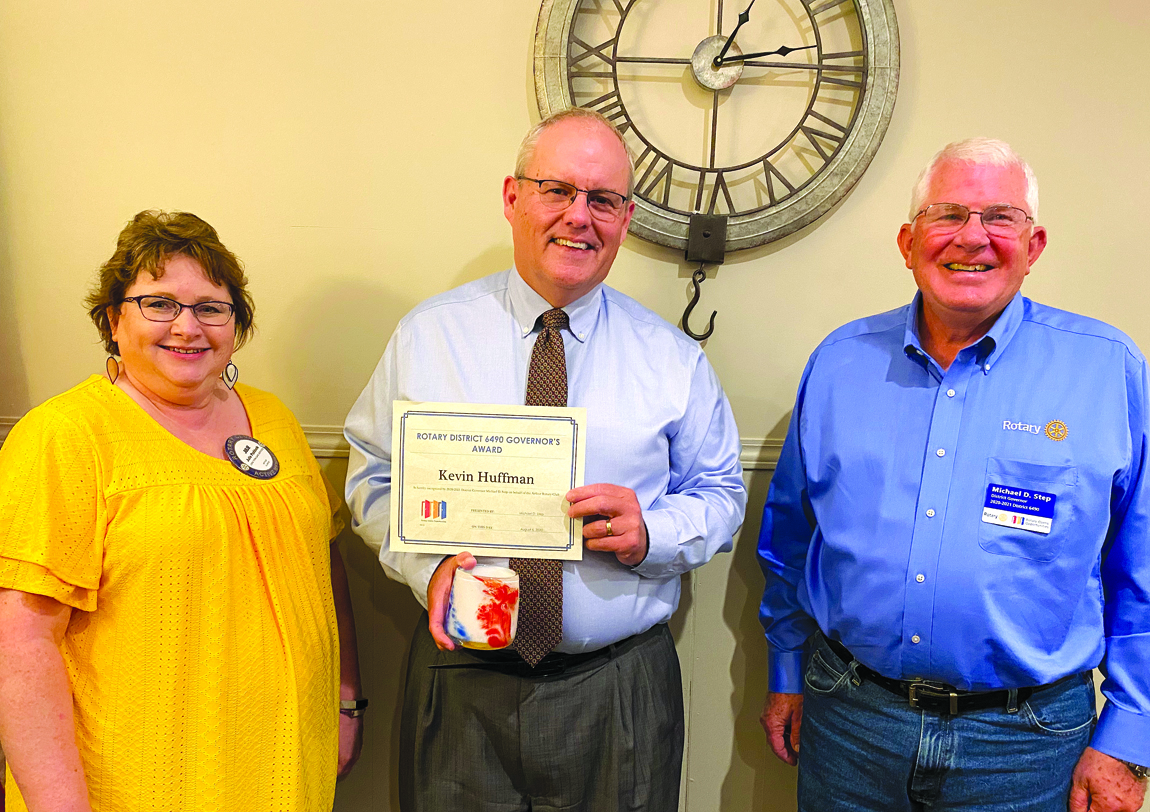 Rotarian Huffman Honored. Pictured is Arthur Rotary President Julie Paddock along with Governor’s Award recipient Kevin Huffman and Rotary District 6490 District Governor Michael Step following the presentation at Yoder’s Kitchen on August 6 at the clubs weekly meeting/luncheon. Step was also the guest speaker that day touching on the monumental changes in 2020 referring to the global pandemic and how Rotary has not stopped in a constantly changing world. Photo by Carol Huffman.

“Kevin Huffman is a dedicated Rotarian and Arthur citizen who does so much behind the scenes to make Arthur a better place to live. You can always count on Kevin to be at most every Rotary activity or event, as he hasn’t missed a meeting in over three decades,” stated Rotary Club member, Dave Allen, as he acknowledged Kevin Huffman’s nomination for the Governor’s Award. While Kevin himself was quite surprised on receiving it, those in the club weren’t. Most of them all felt that he was the ideal component to being the nominated representative for the award.

For those who need to understand what Rotary does or the impact that the club has on a community, it is quite simple to put into words. Rotary impacts Arthur by providing funds for scholarships, sponsoring the Rotary Youth Exchange Student, funding for District 305 student computers, and funding for various other projects in and around Arthur.

For those in Rotary, they have a chance to be nominated for a new award, known as the, “Governor’s Award.” According to the club President, Julie Paddock and member, Kevin Huffman, the Governor’s award is a newly formed award that was formed by the Rotary District 6490 Governor Michael Step from Paris. It is to honor someone in each local club who has served their club in some capacity.

Julie explained how Kevin was chosen. “The District Governor gave an award to a person in each club in the District that embodied Rotary. He personally visits each club in the district at least once and wanted to present it while he was there. It was up to me to decide who that should be.

I immediately thought of Kevin and reached out to a couple of other long time members to get their thoughts. We all thought he would be a great choice,” she said. And there are several reasons why Kevin is a great choice.

He joined Rotary January 11, 1983. Since his grandfather had been very active in Rotary, Kevin was already familiar with it. He joined when Jim Winningham, from the State Bank of Arthur, invited him. Winningham told Kevin that joining Rotary would be a good way to meet people in the Arthur Business Community.

Presently, Kevin serves as the Secretary in Rotary and helps keep track of attendance. In the past, he has served as President, was President-elect and Vice-President. While he has served in many leadership roles, Kevin has had 37 years of perfect attendance for meetings!

“He always makes up meetings wherever he is at the time. I believe he has made up meetings in Hawaii, Mexico, Canada, and even on cruise ships. That is just to name a few. I was impressed to say the least,” stated Julie.

Kevin is also a Paul Harris Fellow. He heads the local Rotary Youth Exchange Program and has been a host for a student too. “He works hard at setting it up, getting host families and making sure the students feel welcome the whole time they are here,” noted Julie.

Not only does Kevin head the local Rotary Youth Exchange program, he also has headed the “Student of the Month” program. And if that isn’t enough, Kevin has been involved in the Scholarship Committee, Membership Committee, and the Fireworks Committee. With all of Kevin’s dedication to Rotary and the community, it is easy to see why he was the perfect choice for the award. His fellow Rotary members couldn’t agree more.

“His leadership and commitment to the Rotary International Youth Exchange program has made hosting exchange students from across the globe possible for the past several years. That alone has impacted so many lives in our community and school system, and has made the world much smaller as we get to know these students. Likewise, Kevin has faithfully helped plan and work at the Arthur Rotary Fourth of July Fireworks for many years. His calm and steady demeanor helps keep things in perspective even when things don’t go as planned. There are many other contributions that he has made not to mention his love and dedication for his family. Certainly, there is no one more deserving of the Governor’s Award than Kevin,” stated Dave Allen.

Pastor John Stewart of the Arthur First Baptist Church is also a fellow member of Rotary, and also believes Kevin Huffman to be an exemplary choice for the Governor’s Award.

“He has shown his dedication to Rotary and its service to the community of Arthur through 37 years of perfect attendance – 1 meeting a week, 52 weeks a year, for 37 years. Of course, many of the local meetings he had to miss were made up at Rotary Clubs in other nearby towns or while on vacation – even while on a cruise! He has also been a part of virtually every special focus committee Rotary has had – membership, fireworks, and senior high/junior high student of the month. Kevin exemplifies through his years of serving and commitment to Rotary and the community of Arthur the true meaning of the Rotary ideal of ‘Service above Self’. He gives selflessly of his time, talents, and resources to assist others and to make Arthur a wonderful place to call home. The Arthur Rotary Club is grateful for all that Kevin has done to make being a member of Rotary a valued and worthwhile pursuit. What he has given back to the community is immeasurable,” explained John.

“Kevin has a wonderful wife Carol, and a daughter Mary. We are really fortunate to have him as a part of our Rotary club,” added Julie.

Kevin took a moment to share some final words about his time in Rotary. “I have been the Rotary Youth Exchange Office for several years in our club, and have enjoyed recruiting host families, and caring for our international students as they attend school here in Arthur. I have made many lifelong friends and connections around the world through Rotary.”

If anyone is interested in Rotary, they are always looking for service minded individuals that live or work in the community to come and be a part of the organization. Just reach out to any Rotary member.