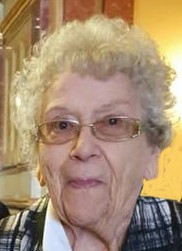 A Graveside Service will be held at 11:00 a.m. Thursday, August 13, 2020 at the Arcola Cemetery with Pastor Brent Budd officiating. Shrader Funeral Home, Arcola, is in charge of arrangements.

Pat attended Arcola High School and was a 1950 graduate of Eastern Illinois University. While at EIU, she was a founding member of the Delta Zeta Sorority Gamma Nu Chapter. She taught school in Arcola and surrounding communities. After Pat left education, she assisted her husband, Purl, on their farm in rural Douglas County.

She enjoyed 40+ years of retirement and in her later years loved antiquing, cooking, playing cards,and spending time with her family. Pat was an exceptional baker and gardener. In her most recent years, she won a handful awards for her artwork in senior competitions in Central Illinois.