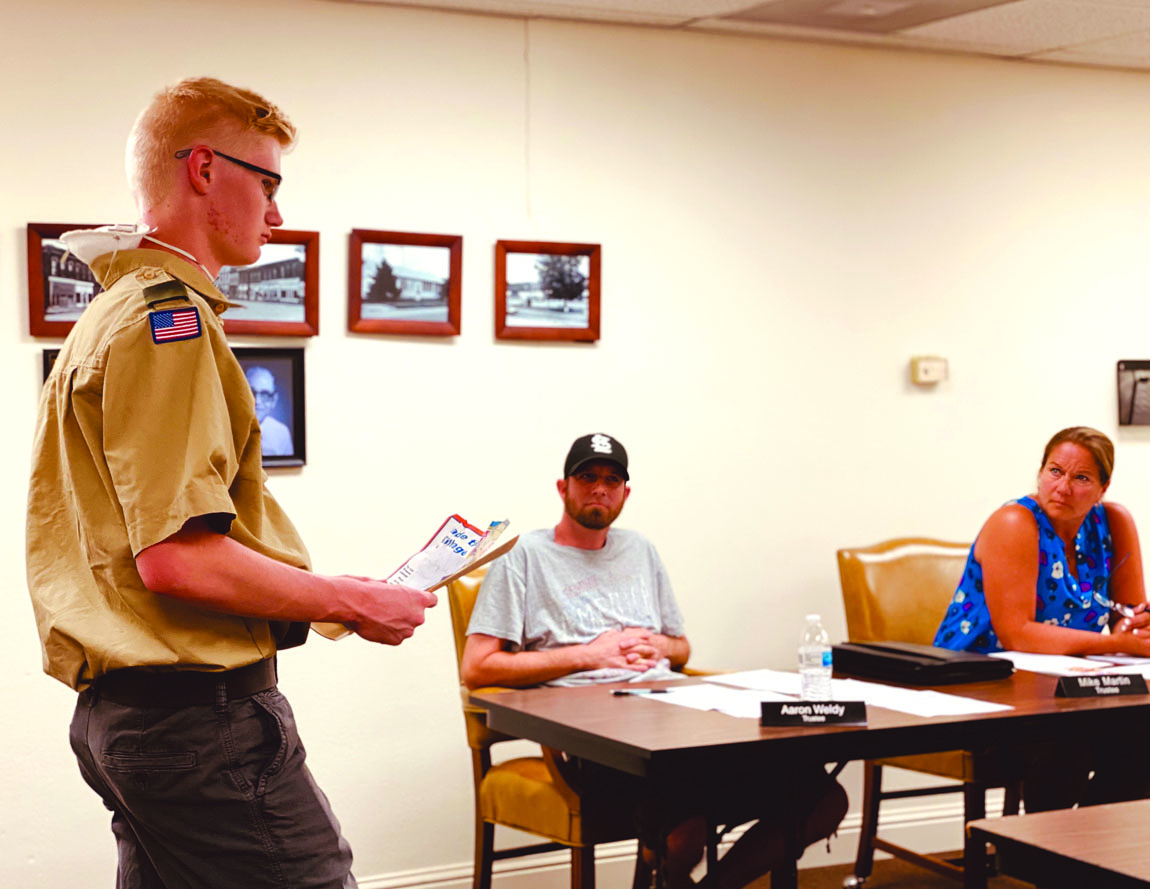 Jon Freese, a local Boy Scout hoping to earn Eagle Scout rank, presented his project to the Cerro Gordo Village Board. Below is the information about his Eagle Scout project. 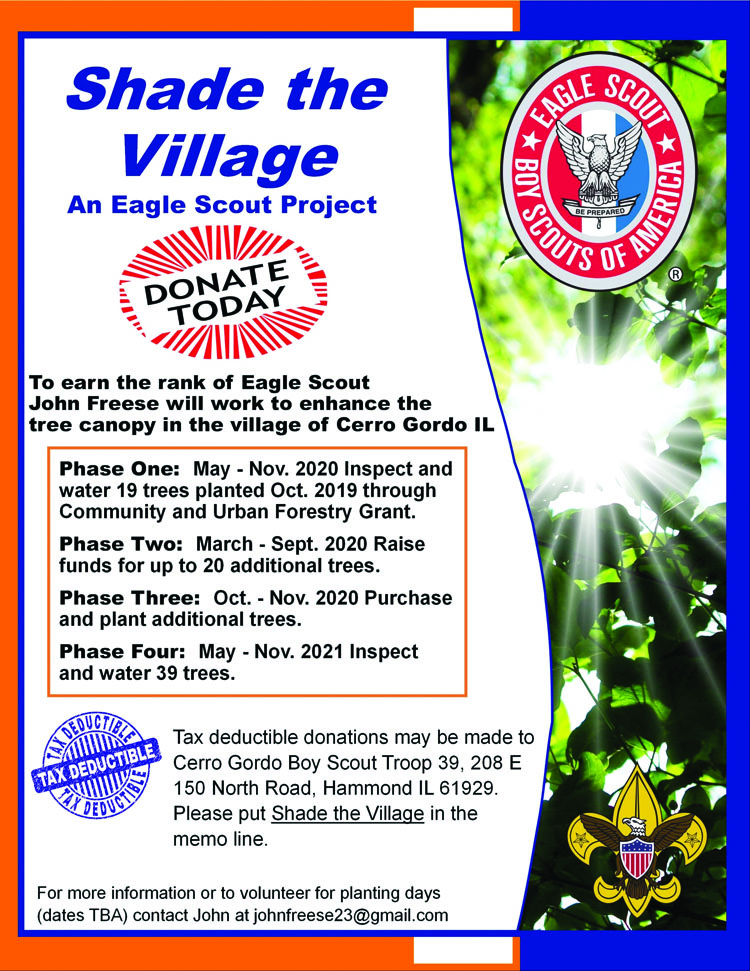 On Monday evening the Cerro Gordo Village board met as they have for weeks now in person, but with Facebook live for the public. Public comments have been available for submission through village@fathill.com by noon the day of the meeting. The board meets for regular meetings the third Monday each month at 6:30pm at the Municipal building in Cerro Gordo.

Jon Freese, a local Boy Scout hoping to earn Eagle rank presented his project to obtain that rank Monday evening. His father, Dennis Freese, was present to support his son and is also a local Scout leader.

For his project Freese stated, “I was wanting to plant 20 trees in addition take care of the 18 trees provided by the community from the forestry grant. I am also taking care of the new tree at school, so every Wednesday I have been watering the trees and giving them 20 gallons of water which is equal or around to an inch of water.”

Freese plans to plant 20 trees throughout the village with donations and aid from Scouts. He estimates the project to cost around $2,000. (photo of plan and of Jon Freese presenting to the board attached)

Public Comments and Smoking Issues with The Depot Discussed

The public comment section was full of a few emails and discussion between various business owners in Cerro Gordo. The first email discussed was from Shannon Luthy. She is the owner of BeaYoutiful Beads and Baubles in Cerro Gordo. Her store is directly next to The Depot “I have been witness to suspect activity on south street that might be curtailed by police presence during the overnight hours every once in a while.”

Her main concern was drunk driving, as she says she witnessed a couple leave intoxicated one evening after she closed up shop. “I had to work late one night and my building left around closing time at the bar. While I was there, I ignored the loud music, smoking, and drinking on the sidewalk because that late hour of the night, who are they really bothering?” She added, “But I felt compelled to say something when I witnessed a few very intoxicated people leaving the bar driving away. One couple that can barely walk and absolutely no business driving.”

Bartender for The Depot, Amanda Rickner addressed the issue later in the meeting. “I just want to put out there that we do have a ride service here in town and it is respectful that she is concerned about people driving.” She added the bar offers a ride service, and both herself and the owner, Mark Kaufman have given rides. “…so we do try to prevent people from drinking and driving, but we cannot force somebody to make a decision that they make on their own.”

Rickner went on to address the smoking issues, and those taking drinks outside, which a few have pointed out on social media and to the village. She stated the bar has hired someone to watch the door every Friday and Saturday night. “I am not saying it is never going to happen. You go to any bar and somebody is going to sneak them out.” As far as the “smoking issues” owners of nearby businesses have complained about butts being left out, and smoke coming into their building when customers stand directly outside the bar while smoking. The law dictates you must be 15 feet away from any entrance to smoke. If the customers are to stand 15 feet away, it puts them close to the road. The Depot is looking into barricading a parking spot in front of the bar for a designated smoking spot to help decrease the issues. Not everyone was for it.

Board Member Aaron Weldy spoke out asking why not route the smokers to the back of the building. Rickner cited that it is an alley, so technically still a roadway. She also mentioned the bar would then need to add a door for their stock, and mentioned for them it would be harder to watch. Weldy stated, “Why don’t you just route them through the back to the alley?” Adding, “That solves way more problems than the parking spot.”

Trustee Beth Medlen agreed that a more permanent structure like a smoke shack which the Legion has would be ideal, but not feasible at the moment with the loss of business due to closures. The bar did reopen defying the Governor’s order last month, and has stayed open since. Medlen stated, “I guess the thing I come to the parking spot if I focus on our ordinances, the protection of the city, the goals of the city, and goals of the business owner and the law, right? If I am truly focusing on those things and those things only setting aside a parking spot area that is technically abiding by the law because it is 15 feet away.”

There was a consensus that the board would review a plan for using a parking spot as a temporary designated outdoor smoking sectin. Weldy abstained.

Rickner was also present to discuss the possibility of outdoor events. Approval of all events are subject to certain guidelines with the current State stay at home order. Even when outdoors, social distancing of 6ft is supposed to be maintained, and until June 26th if the Governor moves Illinois to Phase 4 only ten people are allowed by law to gather. Once into Phase 4, the amount of people moves to 50. With an outdoor event, the bar will also need to acquire a special use permit for outdoor drinking. Board Member Jeff Powers was in support of The Depot doing so once allowed, but warned, “I would doubt it is going to happen in July.” Board President Tim Allen added, “I would say with the way meetings are setup earliest will be August.”

The IEPA Water project is still on, but facing more cuts. The loan forgiveness has went from the original amount of 70% to 50%. Engineer Tom Overmyer suggested splitting the project in half, in hopes the village can obtain the same ranking project necessity wise as this year.

“Unfortunately the IEPA because of the high demand they have cut the loan forgiveness in half.”

Overmyer’s suggestion is to still go forward with the 1.45 million dollar plan, but during a committee meeting address the areas that are of priority. If the village decides to split the project in half, they would borrow $800,000 this year with a 50% forgiveness of $400,000. The interest rate would be 1.25% with the annual debt service rate of 16,000. Then, the following year borrow the rest, so that would be borrowing $650,000 with a 50% match and the annual debt service would be around $13,000. The board agreed the best idea was to split up the project. The water committee will meet to figure out a plan.

Other News and Information:

•The Bird Run is on! It is scheduled for August 1st

•A fair housing agreement was adopted. This agreement basically states that one cannot refuse the sale or rental based on race or sex. The village currently follows this, but an ordinance had not been adopted. Therefore, Ordinance #658 was approved

•Approval authorized for Tim Allen’s signatures on documents regarding grants.

•Syd Morganthaler is donating sand for volleyball pit at Born Park. She was given approval to coordinate with Mark Blickensderfer to put it in once the park is allowed to reopen