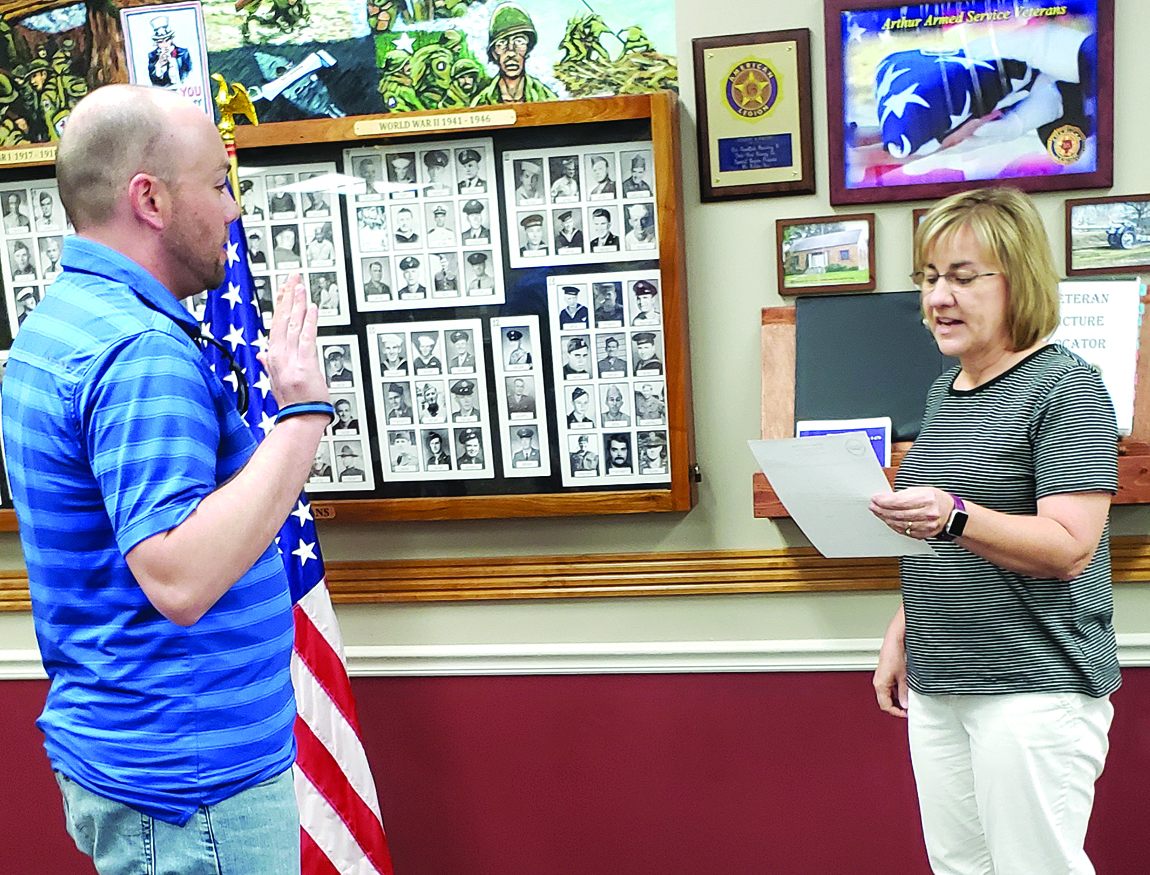 Sean Lang is sworn in as a part-time police officer for the Village of Arthur by Village Clerk Rhonda Rhodes.

Board discusses and passes new ordinance, allowing for outdoor seating for restaurants and bars

Members of the Arthur Village Board came back together for their June 1, 2020 meeting, but still took precautions by using social distancing. Matt Bernius made a motion to approve expenditures in the amount of $18,274.67 since Treasurer Mike Hilgenberg was absent. That motion was approved.

“It will be a year to remember with all the challenges of COVID19 and now, even more so, with the civil unrest from protesters and ensuing violence and destruction in our cities,” commented Mayor Rod Randall. “These are trying times, and I am glad that our community has not felt all the bad effects that other communities are experiencing, but we still feel for them and hope that we all can get through this soon,” he added.

Chief Goodman reported that he had been in contact with the County and State Police regarding the recent rioting and looting that were taking place in the other cities. “The recent social media postings have concerned many locally,” Goodman said. “These reports are being monitored, but so far nothing credible has come from them, he said. At this time, Goodman continues to be in contact with the Douglas County Health Department in regards to the COVID 19 virus, as Illinois entered “Phase 3.”

After detailing the past work experience and qualifications of Sean Lang, (an applicant for part-time police officer), the board made a motion to hire him for the position. The motion was approved.

Due to budget shortfalls from the COVID19 shutdown, Public Works Supervisor, Grant Corum announced that the chip and oil program would have to be dialed back. He said instead of tiling and reshaping the third section of town, areas would be patched instead.

After that announcement, Grant then went on to speak about the problems that there have been with the present recycling program. He said that there have been items put in the recycling bin that were not recyclable and that it had been overflowing onto the ground every week. When non-recyclables are put into the bin, it contaminates the recyclable items. Currently, the village is paying $500 per week for the program. Christy Miller informed the board that the Community Relations and Tourism Committee would research other options for recycling. After the discussion, Dave Tiffan made a motion to discontinue the village’s recycling service with Advanced Disposal and for the village to begin investigating one trash service in town with mandatory trash bills included on water bills. After Justin Ray seconded the motion, it was passed.

Corum also presented the board with information on the purchase of a new truck for the Public Works Department. Presently, the department has been using a 2017 SuperCrew, which will be sold to the Police Department. Matt Bernius made a motion to purchase a 2020 Ford SuperCrew Cab Pickup Truck through the Illinois State Bid Contract for the amount of $36,528. The motion was seconded and approved.

Attorney Kenny Crossman presented an ordinance that would allow outdoor seating and dining at restaurants and bars during the “Phase 3” reopening. Mayor Randall read through a section of the ordinance which stated that the establishments must provide Certificate of Insurance in the amounts listed. After Christy Miller questioned the hours of operation that was provided, board members had discussion about extending the hours to 11:00 pm. Trustee Jennifer Marner also asked about extending this ordinance past phase 3 if desired. A motion was made to approve the ordinance that would allow temporary outdoor seating and dining on public property for restaurants and bars along with the three changes made: 1) closing hours were switched from 9:00 pm to 11:00 pm, 2)Section 3 and 6, change Public Works Supervisor to Liquor

Commissioner and 3) In section 1, add that the ordinance would remain in place until it had been revoked by the board. The motion was approved.

Before wrapping up the meeting, Mayor Randal had a discussion with the board regarding the procedures and operations of COVID19 precautions in the Village of Arthur and its residents, businesses, staff and employees. Christy Miller noted that the Welcome Center was clean and ready to open along with some new guidelines. Plexiglas will be installed to shield volunteers from visitors and the picnic tables, buggy and pop machine will be cleaned each day. The Welcome Center will close at 5:00 pm on Sundays.