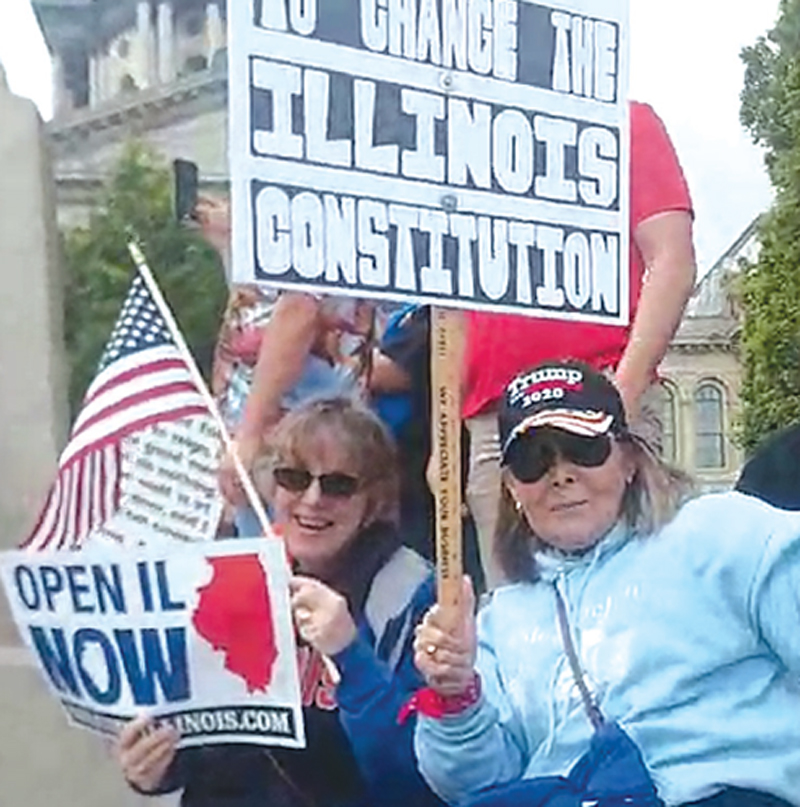 Marty Yeakel and Judy Beachy rest on the steps in front of the Lincoln statue at the Capitol building after a mile walk from downtown Springfield on Wednesday, May 20.

On Wednesday, May 20 a group of Illinois citizens gathered in Springfield at the Bank of Springfield Center (formerly Prairie Capitol Convention Center) to make their voices heard to members of the legislature in attendance in the state capital for the first time in many months.

Although smaller than some of the recent Re-open Illinois events, the crowd was just as enthusiastic. People from all over the state were there to express their opinion as to some of the governor’s recent declarations regarding reopening Illinois.

Many were small business owners and many were there on behalf of reopening their churches.

On the previous Friday, Gov. Pritzker had ruled that those who did not follow the directives in his reopening plan would possibly be subject to a Class A misdemeanor which could mean a $2500 fine and/or a year in jail. This would apply to, for example, restaurants that open for indoor service or beauty salons or barber shops that open early.

During the course of the day, the protestors spent time chanting things like, “Open Illinois,” and “Fire Pritzker,” and shared their stories with each other.

The peaceful protest was watched over by the Springfield and Illinois State Police.

At one point, the crowd walked to the Capitol building about six blocks over from the BOS Center. Springfield police led the way and blocked off streets so everyone could move safely from one point to the other.

Many in the group thanked police officers for their help.

After about a half hour at the Capitol building the crowd then headed back to the Bank of Springfield Center.

Upon their return, it was soon learned that the governor had rescinded his controversial rule after he came to the realization that the Joint Committee on Administrative Rules, JCAR, a group of 12 legislators who were to vote separately on his Friday mandate, was not going to vote his way.

These JCAR members had in the previous 48 hours heard from more than 20,000 Illinoisans regarding their objections to this rule.

According to Illinois Policy, a conservative group, a majority of Illinoisans “believe small retail businesses should be allowed to open immediately if they follow the same social distancing requirements big box stores must follow, according to a recent poll.”

As of this writing, the legislature continues to meet with much to discuss including trying to come up with a budget in a state with tremendous financial difficulties going back many years. Things seem to be changing daily if not hourly with many weighing in on the reopening issue from the Department of Justice to the President of the United States.