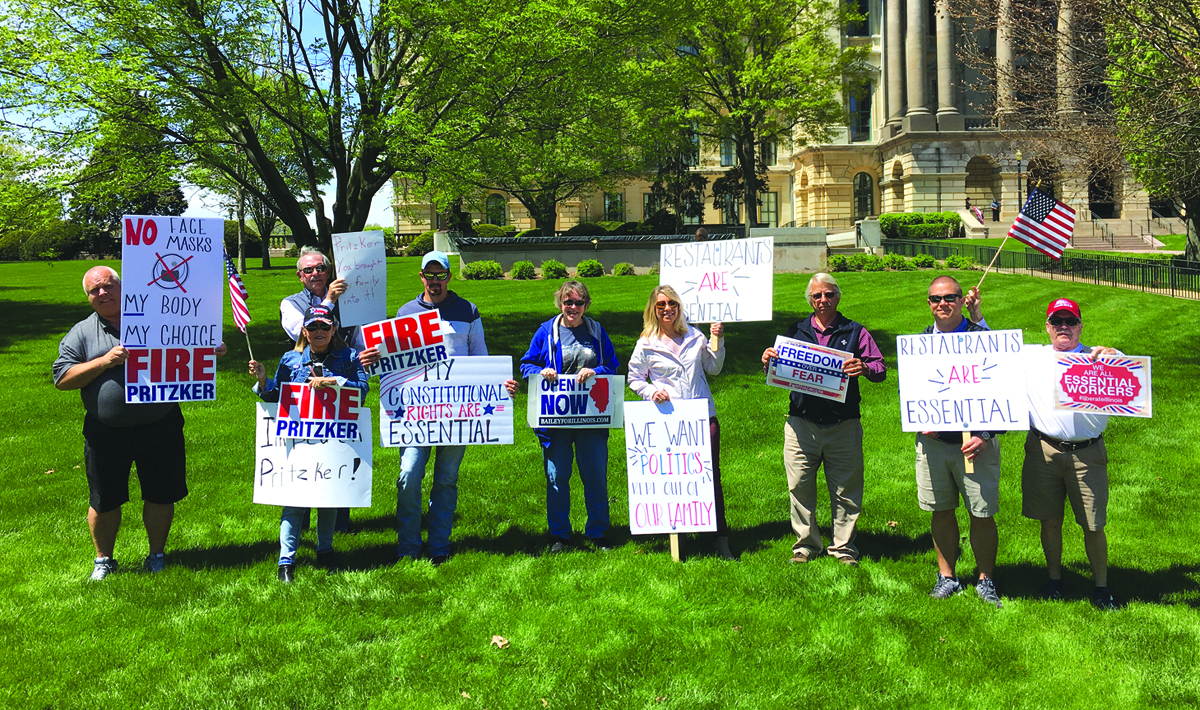 Help Save Our Businesses…..ReOpen Illinois! Nelson Herschberger, Judy Beachy, Delano Yeakel, Omer (OJ) Miller, Marty Yeakel, Anna Hershcberger, Andy Helmuth, Daren Herschberger, and Leonard Beachy joined the hundreds of people who rallied in Springfield on Friday, May 1 to protest against Governor JB Pritzker’s extended stay-at-home order feeling their rights as Americans were being infringed upon. Also pictured is Representative Darren Bailey (R-Xenia) with a few of the Arthur area business owners. Bailey speaking to the crowd said, “The question of the day is are you ready to restore Illinois and ready to regain our freedom? Free us.” Protesters of all ages joined the chant to reopen Illinois. Other Central and Southern Illinois Republican lawmakers echoed the calls to reopen the state and are demanding accountability, transparency, and the truth from the Pritzker administration. Pritzker addressed the protests during his Friday afternoon briefing in Chicago saying, “There are a few hundred protesters today, both here and in Springfield, and they’re exercising the right to free speech and we ought to defend to the death their right to exercise that right, even when they’re wrong,” Pritzker said. The governor said Illinoisans staying home to keep others safe should be recognized. 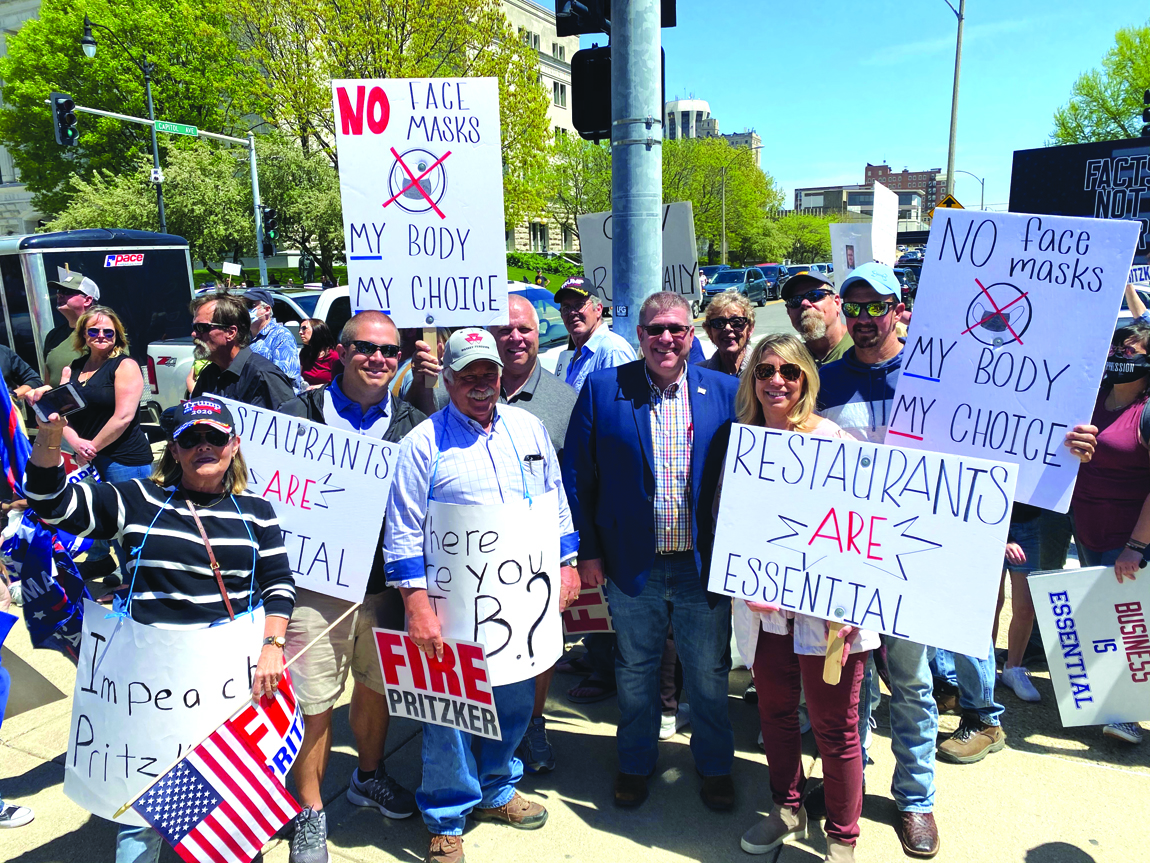 By MARTY YEAKEL
For The Graphic-Clarion

Friday, May 1, was a beautiful day for a group of Arthur residents to travel to our state capital in Springfield to let their voices be heard in regard to the latest orders from Governor Pritzker regarding the lockdown put in place because of the coronavirus. There they joined several thousand like minded citizens of the state who feel it is time to go back to some semblance of normal. After being restricted in our freedom to leave our homes, eat in restaurants, go to school, visit parks, golf and attend church among other things for more than a month, the governor has now declared that this will continue until the end of May. He has lifted some of the rules such as those on golf and opening state parks but has now mandated that stores require customers to wear masks. State law does say that the governor has the authority to take certain actions but the question becomes what type and for how long? He can ask people to limit their activities but can he demand it?

Many downstaters also feel that the governor should take a more regional approach when making these decisions. The Chicago, Cook and collar county areas have more than 2000 deaths while the rest of the state has less than 200. There are still a few counties that do not have any cases. Douglas County has 16 cases, 2 deaths; Moultrie county has 5, no deaths.

The message being conveyed at the rally was that, while understanding that protecting our health is important, protecting our liberty and civil rights is of equal or greater importance. Not to mention the economic impact this is having especially on small businesses and their owners. Many more than likely will go under and the cost financially to so many will show up in a rise in mental health issues, suicide, alcohol and drug abuse and physical abuse. Without the freedom to live our lives many other aspects of our daily living have been compromised.

The day featured several speakers but no doubt the star of the day at the rally was Representative Darren Bailey from Lousiville in the 109th District. Bailey is a candidate for state senator in the 55th District this fall. Rep. Bailey successfully sued the governor in protest of his orders claiming they are unconstitutional. The Clay County judge ruled in Bailey’s favor. This order applied only to the representative as a private citizen. The governor and his lawyers were prepared to appeal to the Illinois Supreme Court before Bailey dropped the suit so that others in the state could begin the process of filing their own suits on behalf of all citizens of the state against the governor’s mandates and at least one more has done so. Law enforcement officials in several counties have also stated they will not enforce what they consider to be unconstitutional . Bailey’s attorney feels that newly uncovered information strengthens their allegation that the governor has overstepped his authority to enforce stay-at-home restrictions because that power rests with the state and local health departments. The lawyer goes on to say that, “Even if well intentioned by Pritizker, his actions as governor have left every citizen in this state completely devoid of any procedural due process rights to protect their liberty.”

The rally was peaceful, exuberant and patriotic. All came away with the feeling that on this day they had the opportunity to exercise both their free speech right and the right to assemble.