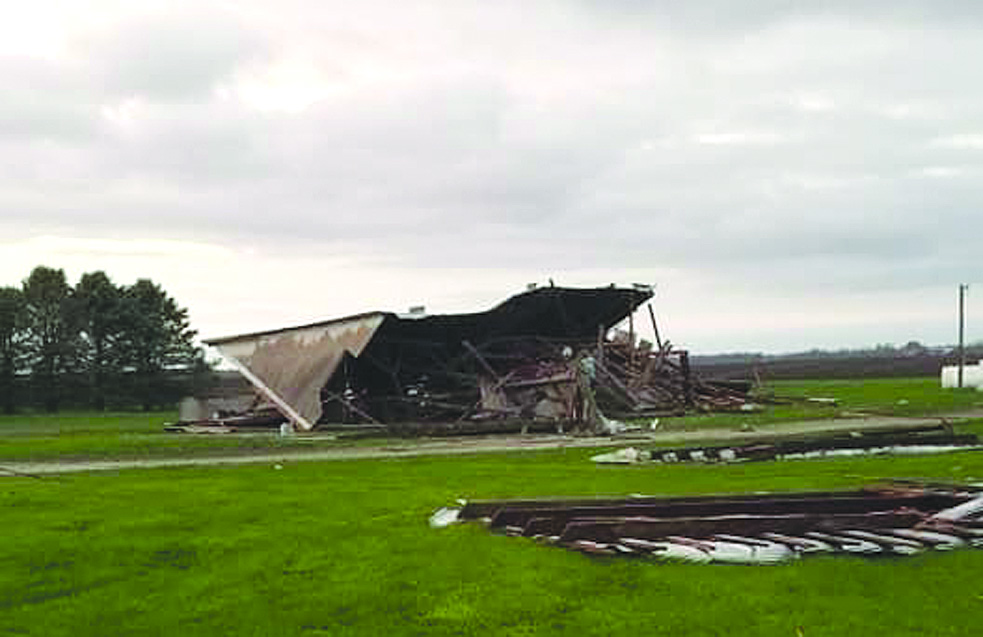 On the evening of April 8, 2020 a severe thunderstorm whipped through the Piatt area leaving behind trees uprooted, pools and trampolines thrown across yards, downed power lines, multiple shingles flew off the roof of many buildings.

The Bement school district suffered significant damage. Superintendent Sheila Greenwood stated, “Damaged roof, hole in the roof, many areas of damage, outfield fence at the baseball field, etc. good news-no one was hurt and we have time to fix it!”

The Cerro Gordo school playground lost a tree, their only remaining tree.

The Cerro Gordo Fire Department among with several first responders responded to the damage throughout central Illinois last night.

Cerro Gordo resident Shelly Braden stated, “I’m on N Lincoln. We just have minor limbs down, and lots of missing shingles. Directly in front of my house, both neighbors lost a full tree.”

Another tree fell across the Railroad tracks by the bus barn and was safely removed.

Resident Evelyn Eads has a tree fly into her house narrowly missing their ramp. “After such a warm day the wind started blowing and I made the comment that there was a train going through them I realized it wasn’t a train it was the storm and it was pretty loud. I kept hearing something hitting the house didn’t know for sure what it was but turned out to be limbs and trim coming off the house. Then the small tree came down just missing the wheelchair ramp, at least it didn’t damage the ramp which we need. Very thankful we are ok and have power because our neighbors to the north have no power.”

Bo Champion, a resident of Cerro Gordo had a full tree uprooted off of S. Jefferson Street. “The wind got crazy, and blew a tree over, also knocked another little one over and it’s leaning on a tree! Had a quit a bit of branches down. It was pretty intense for about 20 minutes.”

Zach Warnick, a resident in Milmine was in Cerro Gordo when it occured and suffered significant damage to his property, but everyone is safe including his animals. “Well I was actually in Cerro Gordo when it all happened. I felt how hard the wind had hit and knew I needed to get home to the animals. I got to the house at roughly 6:10 p.m. and by the time I got here, the shed was down. It took out all the electrical to the house, bin, and sheds. All knew electrical will need to be put it. It also smashed a bean head belonging to Sam Brandenburg. There was also some older farm equipment that didn’t run but we wanted to possibly restore.”

The storm was warned as severe with strong winds, possible hail, and as always a tornado can occur before the warning is issued. It is never a bad idea to have a weather radio, flashlights, and a safe place to go during severe weather. With it being April severe weather time has just begun. Covid-19 might be changing our lives, but weather remains the same.